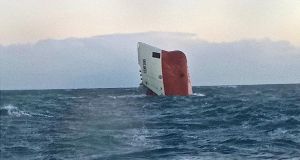 The Cemfjord cargo ship after it overturned off the north coast of Scotland. . Photograph: RNLI Wick/PA

Eight crew members of a cargo ship that capsized in heavy seas in the Pentland Firth are presumed lost after a huge search operation failed to find them.

The Marine and Coastguard Agency (MCA) said there was no sign of the crew of the Cypriot-registered Cemfjord after a second day of a sea, air and land search by helicopters, lifeboats and coastguard rescue teams was called off as the light failed.

During the afternoon, roughly 24 hours after its upturned prow had been spotted in the Pentland Firth on Saturday by a passing passenger ferry, the Cemfjord sank below the surface – extinguishing hopes of survivors on board.

“The vessel is no longer visible,” an MCA spokeswoman said. “The coastguard rescue teams are still searching and the helicopters are still up.” However, there was “sadly” no sight of the crew.

The last confirmed sighting of the Cemfjord was at about 1pm on Friday, when weather conditions in the firth between Orkney and mainland Scotland were described as “pretty, pretty bad” by Royal National Lifeboat Institution crew at Wick.

Its vertical prow was seen by crew and passengers on a passing ferry more than 24 hours later east of the Pentland Skerries, and the alarm was raised. – (Guardian service)