Belarusians march again as France says Lukashenko has to go 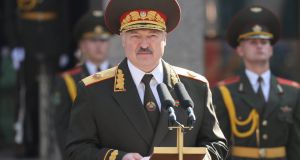 Alexander Lukashenko during a presidential inauguration ceremony at the Palace of Independence in Minsk, Belarus. Protests continued on Sunday amid allegations from the opposition that the recent election was rigged. Photograph: Maxim Guchek/EPA

Tens of thousands of Belarusians have joined another round of protests against the country’s autocratic leader, Alexander Lukashenko, as Russia and the West clashed over how to resolve the biggest crisis of his 26-year rule.

Demonstrators marched through the Belarusian capital, Minsk, and other cities on Sunday in what they called a “people’s inauguration” for opposition leader Svetlana Tikhanovskaya, who they believe was the rightful winner of last month’s presidential election. Riot police arrested dozens of people and used tear gas and stun grenades against some protesters.

Mr Lukashenko’s claim to have won the ballot with an implausible 80 per cent of votes sparked huge rallies, which police met with a brutal crackdown in which at least three people have died, hundreds have been hurt and more than 10,000 detained.

The European Union says the election was rigged and regards Mr Lukashenko as an illegitimate leader, but he has been promised financial and security support by Russia, which accuses the West of meddling in Belarus’s affairs.

“Today is the 50th day of our protest and the Belarusian people are again coming out into the streets. We have come out to stop this regime, and we are doing it peacefully,” declared Ms Tikhanovskaya, who fled her homeland last month due to threats and is now based in neighbouring Lithuania.

“Democracy is the power of the people. And a whole people is stronger than one man, because the people are fighting for their rights, their future and the future of their children,” said the former housewife, who entered politics reluctantly in May when her husband – a popular opposition blogger – was jailed.

“We are millions, and we are ready to take responsibility for our decisions. That’s why we will win,” she said on Sunday.

Mr Lukashenko claims his opponents are “puppets” of western powers that want to oust him and deprive Russia of a long-time ally. The former Soviet state farm boss was inaugurated last Wednesday in a ceremony that was kept secret until after the event.

“It is a crisis of power, an authoritarian power that cannot accept the logic of democracy and which is hanging on by force. It is clear that Lukashenko has to go,” French president Emmanuel Macron told his country’s Journal du Dimanche.

He expressed admiration for “the courage of the protesters” who “are pushing forward with the movement to make democracy come alive in this country that has been deprived of it for so long”.

Mr Macron said he told Russian president Vladimir Putin that Moscow “has a role to play, and this role can be positive, if he pushes Lukashenko to respect the legitimacy of the ballot box and free political prisoners...That was 15 days ago, and we are not yet there”.

Russia criticised EU states for refusing to recognise Mr Lukashenko’s presidency and for preparing to impose sanctions on members of his regime.

“We think these decisions completely contradict international law,” said Kremlin spokesman Dmitry Peskov. “Without doubt, these decisions do not facilitate the development of dialogue and are essentially indirect interference in the internal affairs” of Belarus.