Some British voters do not know they are in EU, says electoral commission

Wording on referendum on membership should be changed to limit misunderstanding 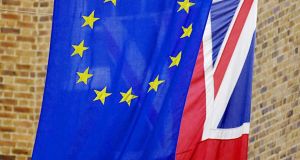 Finding “low levels of contextual understanding” about the EU, the commission said some participants had “no knowledge” of the EU or of the status of UK membership of the union. Photograph: Tim Ireland/PA

The wording of a proposed referendum on the United Kingdom’s membership of the European Union should be changed because of the number of UK voters who are unaware the UK is already part of the EU, an official inquiry has said.

Legislation before the House of Commons proposes voters should be asked, halfway through the life of the next parliament, whether the UK “should be” an EU member.

Saying the wording should be changed to ask if the UK should “remain” in the EU, the Electoral Commission said that would “reduce the risk of misunderstanding or ambiguity” about the UK’s status.

“The research findings suggest that in its current form the proposed referendum question has the potential to mislead voters if used in a referendum and is therefore not suitable,” said the independent body.

’Underinformed’
Finding “low levels of contextual understanding” about the EU, the commission said some participants had “no knowledge” of the EU or of the status of UK membership of the union.

“Most reported that they felt underinformed about the subject matter as well as the arguments for and against the United Kingdom,” said the commission, which has the duty to comment on the fairness of language in election questions.

Typically, the participants in the commission’s research expressed their views strongly based their opening views on “the small amount of knowledge they did hold”, confident about their choices.

However, “as the discussion progressed, most also recognised that their own knowledge of the subject matter was lacking”, leading them to seek more information to be able to make an informed choice.

Six wordings
During its research, the commission put six possible wordings before a panel. Some options were found to be “too wordy”; some were seen to contain inherent biases, while others were simply confusing.

Meanwhile, a Commons inquiry warned yesterday that racism and discrimination continued “to occur covertly and without appropriate redress” in elections in Britain, causing division and alienation among communities.

Significantly, the Commons all-party parliamentary group into electoral conduct warned the situation was getting worse: “It is clear that some of the good practice that was in place has either stopped or, in some cases, is being undone.”

The UK Equality and Human Rights Commission had “neglected its responsibilities and lost some of the good practices” carried out by its predecessor, the Commission for Racial Equality, the MPs said. “It is clear that the biggest gap in the system is a statutory body willing to lead the charge against discrimination,” they said.