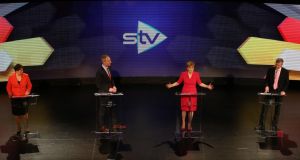 Scottish first minister Nicola Sturgeon has declared that a vote for the Scottish National Party in next month’s Westminster elections “doesn’t mean that there will be another independence referendum”.

However, the SNP leader was met with groans from some in the Edinburgh audience at the TV leaders’ debate hosted by STV when she refused to rule out the holding of a second referendum.

The groans will be interpreted differently in Scotland’s partisan politics, though it does reflect weariness about years more of constitutional debate – even if polls show that Scots expect a second referendum will be held.

Saying that she respected last September’s defeat, Ms Sturgeon said it was up to Scottish voters to back a party offering a referendum pledge in its manifesto for next year’s Holyrood elections.

Pressed by a member of the audience, she replied: “I will fight one election at a time,” before adding that it is up to people to decide about the timing of a referendum: “Politicians don’t dictate these things.”

Challenging Ms Sturgeon on one of her contributions, where she claimed that Labour has signed up for £30 billion more in cuts, the Labour leader: “You might get away with that in a debate in England but you won’t get away with that here in Scotland. ”

Later, speaking to journalists, Mr Murphy compared politics to football: “Sometimes it is easier to play away as she did last week. At home, you have a record to defend. And she struggled to defend it.”

However, the SNP leader finished strongly in her final contribution, telling voters: “If you vote for the SNP, you get the SNP, the one party that stands up for Scotland. Vote SNP and Scotland cannot be ignored.”

The debate, which will be followed by a second one in Aberdeen tonight, is seen as crucial for Labour’s Jim Murphy, whose party languish in the polls and face the loss of dozens of seats .

Pressed by Ms Sturgeon to join a Westminister alliance to keep the Conservatives out power, Mr Murphy said Labour has always voted against Conservative legislative programmes and “will do so again”.

He refused repeated calls from Ms Sturgeon to confirm that Labour would join a “progressive” alliance in Westminster to keep the Conservatives out of power, if David Cameron fails to win a majority on May 7th.

However, Mr Murphy, again and again, drove home his ambitions to cut zero-hour contracts, to improve the wages of the low-paid and protect public services – key messages to encourage disaffected past Labour voters to support him.

Urging Scots to vote SNP on May 7th “to keep Labour honest”, Ms Sturgeon said: “I don’t want to see the Tories in government, but nor do I want to see a Labour government implement Tory policies.”

“The SNP stood against Donalde Dewar and John Smith, yet she is desperate to make Ed Miliband the next PM. He is weak and not up to being PM and she’ll pull the strings,” Ms Davidson declared.

The SNP leader has already demanded Scottish exemptions from higher pension qualifying ages and other benefits: “How long will the shopping list be? Will there be demands that endanger our United Kingdom. ”

The debate illustrated the different battles that are taking place in Scottish politics: the one between the SNP and Labour, but also the fight between the Conservatives and the Liberal Democrats.