Roy Foster: Britain consigned to margins by the ‘stupid party’

Bad leadership and anti-intellectualism are to blame for Leave victory 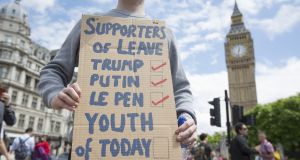 A young protestor holds a placard to demonstrate against the EU referendum result outside the Houses of Parliament in London. Photograph: Jason Alden/Bloomberg

The supine Jeremy Corbyn sleepwalked through a campaign with which he obviously did not agree.

The inadequate leaders of the major parties lacked much conviction, but their opportunist rivals have been full of passionate intensity. For all Nigel Farage’s and Boris Johnson’s crowing about “Independence Day”, June 23rd, 2016, will be remembered as a dark day for Britain. The pleasure it has brought to Marine Le Pen, Donald Trump and Vladimir Putin speaks for itself.

It looks like the break-up of the United Kingdom, and many of us who live in London (and love it) wish that we could join Scotland and make a Unilateral Declaration of Independence.

London voted overwhelmingly for Europe, but the divisions in British society have been thrown into sharp relief – demographically, socially and geographically.

In the depressed ex-industrial areas of the north and Wales, the embittered, the alienated and the old voted to leave Europe – which for many of them was a faraway country of which they knew nothing, but which they blamed for everything. With previous votes made meaningless by Britain’s first-past-the-post system, they took their chance to disobey the metropolitan elites.

They will learn that the effects of global economic shifts cannot be reversed by the ostrich attitudes that produced this disaster and they have just made things much worse for themselves.

The younger generation of British people have, at a stroke, lost the right to live and work on equal terms in 27 countries, and the inestimable social and intellectual opportunities that brings.

The correlation between areas with a high concentration of university graduates, and a vote for Europe, is very striking. I thought irresistibly of the doughty Irish revolutionary Mabel FitzGerald, who – 30 years after 1916 – confided to her friend George Bernard Shaw that she believed that uneducated people did not deserve the vote. Her son Garret corroborated this, telling me that she believed a university degree was a necessary qualification for the franchise “and it should be at least a 2.1”. Nigel Farage, who like Jeremy Corbyn does not have a university degree, will probably now campaign for a referendum to bring back hanging and God knows what else.

I have lived and worked in England for 42 years, have an Irish passport, spend large amounts of my time in France and have always felt that London was a European city.

At a meeting of 80 academic historians from all parts of the political spectrum at 11 Downing Street a few weeks ago, the sense of intellectual solidarity in favour of European membership was powerful and I was foolish enough to believe that these feelings would prevail.

I cannot rid myself of the feeling that we have been living in a bubble.

With MP Michael Gove’s claim that Britain is tired of listening to experts, and Farage’s strident whooping about “ordinary decent people” seeing off the European elite, anti-intellectualism has won out. In the 19th century, the Tories used to be called “the stupid party”, and that element, joined by an alarmingly large number of Labour voters, has consigned Britain to the margins.

Victorian philosopher John Stuart Mill, a public intellectual when the English produced such things, once remarked that Ireland was in the mainstream of European history, whereas England was in an eccentric tributary.

On June 23rd the country headed back there, led by a motley crew of reactionaries and opportunists, and no one should be happy about it. Roy Foster an Irish historian and academic. He is the Carroll professor of Irish history at Hertford College, Oxford