Strong security presence in city for second protest this evening 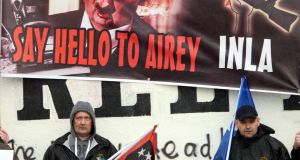 Republicans in the bogside area of Derry, mark the death of Margaret Thatcher, carrying a poster referring to the INLA murder of Tory MP Airey Neave. Photograph: Paul Faith/PA Wire 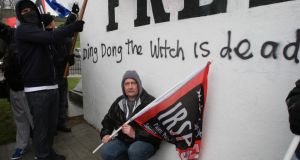 Republicans in the bogside area of Derry, mark the death of Margaret Thatcher, carrying a poster referring to the INLA murder of Tory MP Airey Neave. Photograph: PA

Some 70 republicans mounted a demonstration at Free Derry corner this afternoon following the funeral of former British prime minister Margaret Thatcher in London. A strong security presence is expected in the city tonight for a second anti-Thatcher protest amid concerns of further sectarian attacks on a Protestant estate in the city.

The afternoon protest was peaceful but it was marked by an INLA banner carried by masked men depicting a grotesque Spittin' Image-type picture of Mrs Thatcher. It declared, "Burn in Hell Maggie!" and "Say Hallo to Airey - INLA".

The latter was a reference to former Conservative politician Airey Neave, a close friend of Mrs Thatcher, who was killed in a 1979 car-bomb attack as he was driving out of Westminster by the INLA, the Irish National Liberation Army.

The demonstration in Derry mainly involved members of the Irish Republican Socialist Party (IRSP), the political wing of the INLA, although some supporters of the dissident republican 32 County Sovereignty Movement were also present.

Sinn Fein Assembly member Mitchel McLaughlin, a native of Derry, criticised the anti-Thatcher funeral day demonstrations saying that whatever harm Mrs Thatcher caused when she was alive she could do no harm now that she was dead.

An anti-Thatcher republican cavalcade is planned to take place through Derry tonight amid concerns of further sectarian violence. Since Mrs Thatcher's death over a week ago there have been nightly sectarian attacks on the Protestant Fountain estate, not far from the nationalist Bogside area of Derry.

Earlier this week PSNI Chief Superintendent Stephen Cargin said lives were being put at risks because of the attacks. He said extra police resources would be drafted into the city tonight.