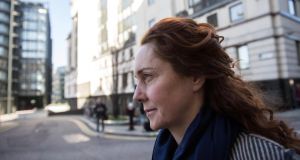 Rebekah Brooks fought back tears at the Old Bailey on Friday as she detailed her “car crash” private life and dysfunctional relationship with fellow editor Andy Coulson as part of her defence against phone-hacking allegations.

Taking the stand for the second day, Ms Brooks (45), close friend of Rupert Murdoch and the last three British prime ministers, said she had had periods of “physical intimacy” with Mr Coulson but denied a prosecution charge that they had a six-year affair.

Prosecutor Andrew Edis had opened the trial in October by arguing that the close nature of the relationship between the two former editors of the News of the World tabloid meant they both knew as much as the other about the criminal activities of journalists on the paper. Ms Brooks and Mr Coulson both deny conspiracy to hack into mobile phone voice messages.

Three senior journalists and a private investigator have admitted conspiracy to hack phones. Mr Coulson, who succeeded Ms Brooks in editing the now-defunct paper and is also on trial, went on to become prime minister David Cameron’s spokesman.

“My personal life was a bit of a car crash for many years,” Ms Brooks said, shortly after asking for a break as her lawyer began asking questions about her first “roller coaster” marriage to soap actor Ross Kemp, her relationship with Mr Coulson and her second marriage to racehorse trainer Charlie Brooks.

Ms Brooks said she had been extremely close friends with Mr Coulson, and on occasion had intimate relations with him between 1998 and 2006. “It was wrong and it shouldn’t have happened but things did,” she said.

The relationship between the two former editors was discovered after police found a document containing a 2004 letter on a computer at Ms Brooks’s London home. She had written the letter after Mr Coulson tried to break off the relationship.

“I do not know if anyone has been in the situation at a time of hurt – you come home and have a couple of glasses of wine and shouldn’t go on the computer,” she said.

Ms Brooks also revealed that a cousin had acted as a surrogate to help her and her second husband have a baby, called Scarlett. Charlie Brooks, a friend of the prime minister whom she married in 2009, is also on trial for trying to hide evidence. – (Reuters)