Pro-Brexit side accused of ‘bizarre’ theories as business leader resigns

British Chambers of Commerce boss had been suspended over EU stance 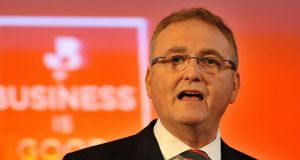 John Longworth, former directorgeneral of the British Chambers of Commerce, who resigned after being suspended for saying the UK would be “better off” outside the European Union, according to reports. Photograph: Ian Nicholson/PA Wire

Campaigners for Britain to leave the European Union have been accused of concocting “bizarre conspiracy theories” about the resignation of a prominent business leader who voiced support for Brexit.

John Longworth resigned as director general of the British Chambers of Commerce (BCC) after he was suspended for saying that Britain had a brighter future outside the EU.

The BCC said Mr Longworth was suspended because his remarks breached the organisation’s policy of neutrality in the referendum but Eurosceptic Conservative MP David Davis yesterday suggested that Downing Street was behind the move.

“The last thing we want to see is a witch-hunt against business leaders brave and astute enough to make the argument that Britain would be better off economically if it regained the power to strike its own trade deals and was freed of the crippling burden of red tape, costing many billions a year, imposed by Brussels,” he said.

“Downing Street has form in this respect. It has already admitted it made a “mistake” in adding the name of Gen Sir Michael Rose, the former special forces commander, to a letter from former military leaders supporting Britain’s continued membership of the EU.”

But defence secretary Michael Fallon said the pro-Brexit campaigners were ignoring the BCC’s denials of any political interference as they sought to inflate the story for their own political reasons.

“People who want to leave Europe – to vote No in the referendum – are seeing conspiracy theories everywhere now because they don’t want to answer the basic question, which is, ‘If you leave Europe, where are you going? What are the new arrangements for trade? What is going to happen to the jobs that depend on Europe?’ They have to start answering these questions instead of coming up with rather bizarre conspiracy theories that here the British Chambers of Commerce have flatly denied,” he said.

“If this is an attempt by some in the Brexit camp to cow civil society into silence on the EU referendum, it’s bound to fail. The public has heard a lot from industry leaders about how a vote to stay or leave will affect UK businesses – there’s no reason why they shouldn’t be hearing from environmental groups about how it will impact our environment and quality of life,” he said.