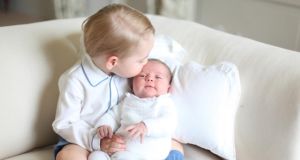 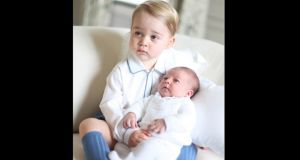 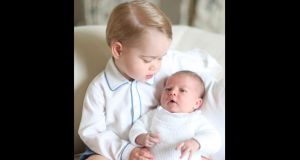 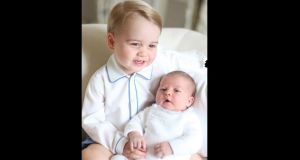 Photographs of Britain’s Princess Charlotte and her brother Prince George have been released by Kensington Palace.

The princess, the daughter of the Duke and Duchess of Cambridge, was born on May 2nd at the Lindo Wing at St Mary’s Hospital in London.

Her full name is Charlotte Elizabeth Diana which was seen as a tribute to the Duke of Cambridge’s father, mother and grandmother.

She is the fourth in line to the British throne behind her grandfather Prince Charles, her father William and her brother George.

The new photographs of the children were taken by their mother Kate in mid-May at Anmer Hall in Norfolk, Kensington Palace said in a statement.

One shows George, who will be two next month, kissing his little sister on the forehead.

It was announced yesterday that Charlotte will be christened at a private ceremony next month by the Archbishop of Canterbury, Justin Welby.

Kensington Palace said in a statement: “Their Royal Highnesses the Duke and Duchess of Cambridge are pleased to announce the christening of Princess Charlotte will take place on Sunday 5th July at St Mary Magdalene Church, Sandringham.”