Peter Hain accused of ‘incomplete’ testimony in ‘on the run’ inquiry 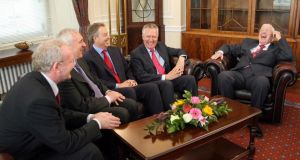 Tony Blair and Peter Hain (centre) seen with Martin McGuinness, Bertie Ahern and Ian Paisley at Stormont on May 8th, 2007. Hain has been accused of giving a “less than helpful” testimony to a House of Commons inquiry into the operation of the On The Runs to 200 Republicans. Photograph: Paul Faith/Reuters.

Former Northern Ireland Secretary of State, Labour MP Peter Hain has been accused of giving “less than helpful” and “certainly incomplete” testimony to a House of Commons inquiry into the operation of the On The Runs to 200 Republicans.

Hain was “very knowledgeable” about the operation of the OTRS scheme, which saw more than 200 Republicans receive letters from the Northern Ireland Office telling them that they were not wanted for prosecution by the British authorities.

More than 40 letters were sent out by his two predecessors, John Reid and Paul Murphy, though the pace accelerated after Hain left office, illustrated by the fact that 85 letters were sent by his successor, Shaun Woodward.

In February 2007, just months before Tony Blair left Downing Street, the Police Service of Northern Ireland launched Operation Rapid to review the names of people who may have been wanted for pre-Good Friday Agreement terrorist offences.

“It was absolutely critical that Sinn Féin signed up to the Policing Board before he left,” said the NI Affairs Committee, but it was poorly set-up and with no rules in place to correct mistakes.

“A process should have been in place for dealing with errors. If there had been such a process when the PSNI were alerted to the Downey error in 2008 and 2009, the error could have been rectified and the letter withdrawn,” they went on.

The wording in the letters sent out to people - which stated that “the PSNI are not aware of interest in you by any other police force”- was allowed to stand, even though it was unclear, since John Downey, for example, was wanted by the Metropolitan Police.

If the PSNI had been properly told that letters had previously been sent out to Republicans, and if it had been involved in the drafting of those letters, it “is almost certain that the Downey judgment could have been prevented”, he said.

The Commons inquiry does not accept the argument made by Hain and by Blair, when he came before it to give evidence, that the OTR comfort letters were necessary to keep Sinn Féin onside.

Blair and Hain’s argument could have been true early on before prisoners had been released, before the Royal Ulster Constabulary was replaced by the PSNI and when “the political situation at the time was difficult”.

“The biggest argument against the scheme being a “deal breaker” is the fact that Rita O’Hare who was, in effect, was the person responsible for the start of the whole process, was neither given a letter nor was able to be processed through the administrative scheme. Despite this, Sinn Féin did not walk away from the peace process,” he said.

And MPs quoted former NI Secretary of State, Peter Mandelson’s judgment that Sinn Féin would not have been quit, “even though they felt very strongly about it and they felt it was very important”.

1 Aaron Brady, the man who said with pride he was a cop killer
2 A year after Nóra Quoirin’s body was found, her parents still believe she was abducted
3 A chronicle of dignity and despair
4 State to investigate claims of bogus employment practices in meat sector
5 Aaron Brady found guilty of capital murder of Det Garda Adrian Donohoe
Real news has value SUBSCRIBE