The Bilderberg Group is meeting in the UK this weekend, and many people want to know why 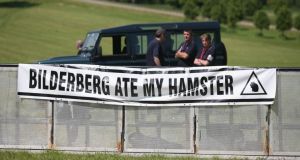 In the eyes of its most extreme enemies, the illuminati are not a creation of the author Dan Brown but, rather, a group of powerful people meeting this weekend in a luxury hotel in the English countryside. Now nearly 60 years old, the Bilderberg Group has been accused of being a secret, shadowy society controlled by the ultra-rich, intent on world domination.

Since Thursday, 130 senior business, political and legal figures have been enjoying the pleasures of the Grove Hotel in Hertfordshire, behind tight security. There, they are debating the need for more growth, “jobs [and] entitlement”, “nationalism and populism”, medical research trends and “the politics of the EU”. The topics also include “cyber warfare and the proliferation of asymmetric threats”, online education and “Africa’s challenges”.

No minutes are kept and no decisions will be made, they insist. Because of the privacy that surrounds it, “the participants are not bound by the conventions of office or by pre-agreed positions. As such, they can take time to listen, reflect and gather insights.”

Such declarations are exactly the problem for its opponents, who see the Bilderberg Group as a body free of democratic restraint, responsible for the Iraq War, airborne chemicals, cancer and privatisation.

Powerful people
Not all of its critics, however, delve into conspiracy-filled language, although, the Labour MP Michael Meacher argues, “These are 130 of the world’s most powerful people. This is not just intended to be a chat. This is intended to reach some decisions and we are not being told what they are.”

Meacher, a former minister under Tony Blair’s Labour government, criticised the presence of politicians such as the European Commission’s Manuel Barroso, Chancellor of the Exchequer George Osborne and Labour’s Ed Balls, and, before them, his former leader, Tony Blair.

The list includes two Irish names: Peter Sutherland, chairman of Goldman Sachs International, a long-time attender, and a former attorney general, Paul Gallagher, who has come every year since 2010. The head of Google, Eric Schmidt, is present, along with two directors of Facebook, Christine Lagarde of the IMF, and a string of bankers, including HSBC’s chief executive, Stuart Gallagher.

Jake Bexx, who says he is making a documentary on Bilderberg, became interested in it after he listened to “the conspiracy theories told to me by my tattoo artist. I used to believe in world government, the illuminati and all of that. I don’t any more; but they don’t tell us what goes on,” he says.

The treasury refused, citing a series of exemptions allowed for under freedom-of-information legislation, and on the grounds that it was “information relating to the formulation or development of government policy”.

Propaganda was not needed, said one of its creators, Dr JH Retinger. “It was of far greater consequence to us to have mutual understanding and goodwill among men occupying the highest positions in the life of each country than to try to influence the man in the street directly,” he wrote in a 1956 note.

The choice of men, for it was then all men, was key: “The first essential is undoubtedly to have men of absolute personal and political integrity; the second, to have men of real international standing, or whose position in their own countries is such as to give them considerable influence.”

For years, conspiracy-filled accusations were of little import to the Bilderberg organisers, the rantings of a few without a platform since it was rarely reported on.

Things have changed a little: globalisation is increasingly under question, charges about the influences on politicians have become more common-place following scandals in the US and the UK. Fuelled by websites such as infowars.com and wearechange.net, Bilderberg has begun to enter a wider stream, even if it is still far from widespread public consciousness.

A PR company was appointed, though it says little. The attendance list has been published for some years, while a partial agenda for the gathering in the Grove hotel has been given out.

On a hill half a mile from the hotel there is a press encampment, where speakers rail against the group’s existence. Opponents include anti-austerity campaigners, old hippies and conservative libertarians such as Alex Jones of infowars.com. Jones is the star of the press camp, with his acolytes hanging on his every word. “We can’t let the ants stand up, that what’s they fear. Because if one does they might all stand up. And there are more of them,” he declaims through a bullhorn.

The campaigners are not united, however. One writer for an alternative media publication mocks a Guardian journalist for “your trivial little stories”.