NotW bosses ‘must have known’ about phone hacking 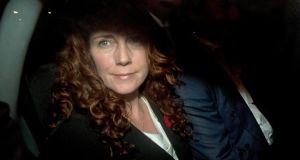 Management at the News of the World must have known about phone hacking, the jury in the trial of former News International chief executive Rebekah Brooks and ex-spin doctor Andy Coulson has been told.

Prosecutor Andrew Edis QC told jurors at the Old Bailey in London that the now-defunct Sunday tabloid was “not War and Peace” and editors could easily track where stories had come from.

Opening the prosecution case in the high-profile trial, Mr Edis told the jury of nine women and three men that a “great deal” of phone hacking went on at the newspaper, with celebrity victims alleged to include Jude Law and Sienna Miller, former home secretary David Blunkett, actress Joanna Lumley, and pop star Will Young.

The court also heard that the newspaper was “ intensely interested” in the Royal family, with alleged victims including Lord Frederick Windsor, son of Prince and Princess Michael of Kent, and Jamie Lowther-Pinkerton, former private secretary to Princes William and Harry, who recently became one of Prince George’s godparents.

Mr Edis told the jury that private investigator Glenn Mulcaire - who the court heard was paid around £100,000 a year - and then royal editor Clive Goodman admitted in 2006 to phone hacking, and that earlier in these proceedings Mulcaire had also admitted three counts of conspiracy to commit phone hacking, along with a count of phone hacking.

The prosecutor said that former NotW journalists Greg Miskiw, James Weatherup and Neville Thurlbeck had also each pleaded guilty to conspiracy to illegally access voicemails and told the jury that those at the newspaper who were in charge of the “purse-strings” must have known what was going on.

He said: “News International was keen to say that phone hacking in the NotW was really limited to Mr Goodman. But this inquiry has proved conclusively that that is not true.

“Obviously it has, because it has secured the convictions of Greg Miskiw, Neville Thurlbeck and James Weatherup.

“So it cannot at all be ever suggested now by anybody that phone hacking at the NotW was restricted to Mr Clive Goodman.”

He added: “The News of the World is a Sunday paper. That means it was published once a week, 52 times a year. It wasn’t War And Peace. It wasn’t an enormous document. It was the sort of document that if you were its editor you could actually take an interest in its content without too much trouble.

“What you are going to have to consider is whether these people were doing their jobs properly, in which case we say they must have known what they were spending the money on.They must have known, we say, where these stories came from, otherwise they would never have got into the paper.”

Mr Edis told the jury that the case - which is expected to last up to six months - involves three types of allegations - claims of phone hacking at the NotW between 2000 and 2006; allegations that Sun and NotW journalists paid public officials for information; and an alleged “cover-up” to try to obstruct police investigating the claims.

Brooks, 45, of Churchill, Oxfordshire, Coulson, 45, from Charing in Kent, former NotW head of news Ian Edmondson, 44, from Raynes Park, south west London, and the tabloid’s ex-managing editor Stuart Kuttner, 73, from Woodford Green, Essex, are all accused of conspiring with others to hack phones between October 3 2000 and August 9 2006. Ex-NotW and Sun editor

Coronavirus: Smartphone app to facilitate contact tracing to be rolled out, HSE says