Nigel Farage taunted over decision not to run for Parliament 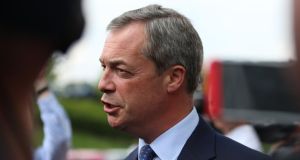 UK Independence Party leader Nigel Farage has been taunted over his decision not to run for Parliament in a byelection triggered by the resignation of disgraced former Tory MP Patrick Mercer.

Mr Farage said he would have looked opportunistic if he stood in a constituency where he had no local ties and he did not want to distract from Ukip’s efforts to claim first place in next month’s European elections.

But he faced questions about whether he had “bottled” the decision to stand in Newark, which Mr Mercer held in 2010 with a majority of more than 16,000.No date has been set for the byelection to fill the Nottinghamshire seat vacated by Mr Mercer, who resigned after learning he faced a six-month ban from Parliament over a cash-for-questions scandal.

Defending his decision not to stand, Mr Farage said: “I’m a fighter, I’m a warrior, but you have to pick your battles in life.”

Tory MP Ben Wallace said: “That faint clucking you can here (sic) in the distance is Nigel Farage . . . chicken!”

Conservative Cabinet minister Ken Clarke, whose Rushcliffe seat borders Newark, said Mr Farage had backed out because he knew he could not win. – (PA)