Muffled bell tolls for passing of once mighty Iron Lady

Maggie’s farewell gig was full of pomp and circumstance, but strangely muted 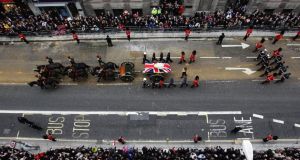 Margaret Thatcher’s coffin is carried on a horsedrawn gun carriage through Fleet Street in London during the ceremonial funeral of the former British prime minister yesterday. Photograph:Peter Macdiarmid/Getty Images

There once was a time when people raised their arms to cast flowers in the path of flag-draped coffins. Now they raise their arms and look away from the funeral procession, peering instead into the small screens of smartphones.

There was a peculiar air of passivity around St Paul’s yesterday morning when the remains of Margaret Thatcher rolled past on a gun carriage; conveyed impressively, provocatively or entertainingly, depending on your point of view.

So much had been expected from the Iron Lady’s final performance. As the foremost politician of her generation, Lady T mightn’t always have provided bread for the masses but she could always be relied upon for a circus.

Her closing number was quite spectacular.

But for all that, the response from the public was strangely muted. A smattering of respectful applause. Some feeble protest. A few teary Conservatives, hankering after strong leadership.

Following the hour-long funeral service (Maggie and Dennis were never ones for long-winded church sermons) and as the hearse moved away, there was more applause. A tall middle-aged man in a city suit, standing in the doorway of a coffee shop opposite the cathedral, shouted: “Thank you, Maggie. God speed!”

But he never lowered his arm, continuing to film the scene on his iPhone as the hearse was driven away and the guests began to leave.

The “flashpoint” area was going to be Ludgate Circus, a crossroads at the bottom of Fleet Street. The media got there before the protesters. So too did a contingent of ex-servicemen, proudly wearing their maroon berets. They wanted to remember the Falklands.

So did the protesters. Along with Bobby Sands, the miners and poll tax.

But they didn’t muster in any great number and most of them seemed far too young to remember the time prime minister Thatcher held sway. When the cortege passed, they turned their backs, booed and chanted: “What a waste of money!”

The rest of the crowd tried to drown them out by clapping.

Limp protest
Much to the disappointment of the vast media contingent, there was no trouble. In London at least, it seems the passions once stoked by Thatcherism have dimmed considerably.

Some people camped overnight to get a good spot at the crash barriers near the cathedral steps, but again, not very many.

They were interviewed ad nauseam by the hordes of journalists struggling to find characters. Margaret Kittle (79) had travelled from Canada and sat through the night, with little company apart from a stream of smiling and slightly desperate men and women clutching notebooks and microphones.

The same went for John Loughrey (57) from Wandsworth, who told us he had relatives in Galway. John was dressed from head to toe in Union Jack clothes and is a regular at this sort of event. He showed us his newspaper clippings and a dog-eared mock-up picture of himself as a member of the royal family.

Margaret and John, along with the lady who attended Winston Churchhill’s funeral, were among the last to leave when the crowd dispersed, hanging on to their time in the limelight.

The biggest cheers of the morning went to the living. In our section of the crowd, all the talk was of Boris Johnson, the mayor of London. When would he arrive? Would we get to see him?

And arrive he did, walking up Ludgate Hill through the churchyard, pretending not to notice the roars from the crowd. “Bojo – you’re late! Over here, Boris, over here! Go Boris!”

Former Labour prime minister Gordon Brown was treated to a chorus of boos when he stepped from his car, giving an indication of the political leaning of the non-tourist element in the crowd.

When Tony Blair and John Major stood together on the pavement, they didn’t know whether to boo or cheer.

But the most heartfelt and respectful applause was reserved for Norman Tebbit, the former Tory minister injured in the Brighton hotel bombing at the Conservative party conference in 1984. Looking frail and stooped, he waved to the crowd on his way in and mouthed “thank you all for coming” as he left in the company of former chancellor Norman Lamont.

A familiar looking man, handsome and plummy of voice, asked for directions. He explained he was a guest and needed to get across the road. It was Jonathan Aitken, the former minister who served a jail sentence for perjury.

Fair cop
A policeman took him in hand, much to the amusement of some in the crowd. “Oi, are you still tagged?” someone shouted. “Watch him, he’s got form.”

It rained, but not much.

As the guests streamed off the VIP coaches with their blacked out windows – did Ruairi Quinn defy the black tie request and wear a green one, as he said he might? – the sound of drums came closer.

Then the band marched past on the sand-covered cobbles, a necessary measure to stop the horses from slipping on them.

This might not have been a full state funeral, but David Cameron’s government laid on a ceremonial funeral with full military honours. Few could have told you the difference.

The British do pomp brilliantly. As the pictures of Margaret Thatcher’s final journey were relayed around the world, the tourist board will have been giving thanks to her for doing them this last great service.

They rolled out the Marines and the Welsh Guards, the sailors and the aviators and the crimson-coated Chelsea Pensioners. Every conceivable bit of uniformed frippery was on parade, from tiger skins to bear skins, tricorn hats and pith helmets, feathered plumes and colourful cockades. And the horses and the marching bands and the gleaming brasses and sergeant majors bellowing orders.

As the bearer party shouldered the coffin, the only sounds were the bell, the crunch of the soldiers’ boots and the incessant whirring of camera shutters. The huge wooden door closed slowly as the coffin passed through. The clock stuck eleven.

The crowd waited until the service ended, the biggest excitement occasioned by a glimpse of broadcaster Jeremy Clarkson. Jeffrey Archer walked past with his wife, Mary, followed by former Conservative MP Neil Hamilton.

Slowly, the public drifted away, leaving the media to pick over the stragglers.

The street cleaners moved in immediately. London returned to normal. We tried to buy a Thatcher mug in a nearby souvenir shop. They had none.