Singer asked to run in next election by animal rights organisation, website claims 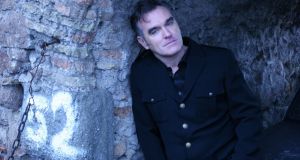 Morrissey is said to be considering standing in the London mayoral election.

Singer-songwriter Morrissey is ‘very seriously’ considering standing in the upcoming London mayoral election according to a post on Morrissey fan site True to You.

According to the post, the singer has been invited to run for the post of mayor by the Animal Welfare Party.

The post, which has been widely reported in the British entertainment press, adds that the 56-year-old former Smiths singer and long-time animal rights activist would require 330 signatures of support in order to enter the race.

Morrissey, was spotted in Dublin earlier this week and a photograph of the singer pulling a pint in the Thomas House pub was shared widely on social media.

The Animal Welfare Party (AWP) aims to promote animal welfare and related environmental issues by ending animal experimentation, increasing penalties for those convicted of cruelty to animals and promoting a healthy plant-based lifestyle.