Michael Gove a ‘fanatic’ who would damage peace process 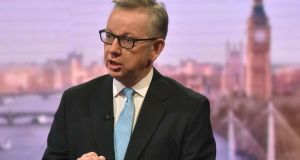 Michael Gove: wrote a pamphlet in 2000 called ‘Northern Ireland: the Price of Peace’ in which he compared the Belfast Agreement to the appeasement of the Nazis in the 1930s and the condoning of the desires of paedophiles. Photograph: Jeff Overs/EPA

Michael Gove is a “fanatic” who would be “dangerous” for the Northern Irish peace process and North-South relations if he won the Conservative Party leadership election, senior figures involved in the design and implementation of the Belfast Agreement have warned.

Mr Gove, a former journalist, wrote a pamphlet in 2000 called Northern Ireland: the Price of Peace in which he compared the agreement to the appeasement of the Nazis in the 1930s and the condoning of the desires of paedophiles.

The Scottish-born Brexit campaigner said the agreement was a “rigged referendum”, a “mortal stain” and “a humiliation of our army, police and parliament”.

Mr Gove’s views are “a fanatical unionist protest against the agreement”, said Brendan O’Leary, professor of political science at the University of Pennsylvania and an adviser to the UK Labour Party and the Irish government in the years running up to the signing of the agreement in 1998.

“This was a disgracefully irresponsible pamphlet at the time and, not just in retrospect, people should consider the deep unsuitability of this man to oversee what will be a difficult period in British-Irish relations going forward,” said Mr O’Leary who worked on aspects of the d’Hondt system in Northern Ireland and on police reform.

In the pamphlet, published by right-wing think tank the Centre for Policy Studies, Mr Gove described the agreement as a “Trojan horse”.

Duncan Morrow, a former head of the Community Relations Council in Belfast, says Mr Gove could “cause mayhem” in Northern Ireland as prime minister. “Gove’s position on Northern Ireland suggests he is one of the most hardline,” says Mr Morrow. “He needs to be asked does he accept the Good Friday [Belfast] Agreement?”

Mr Gove has been criticised since launching his leadership bid last week. SDLP MLA Alex Atwood said people in Northern Ireland cannot rely on his judgment. “Michael Gove has attacked each and every intervention to resolve conflict in Ireland. From Sunningdale to the Good Friday Agreement, from new law on equality and human rights to the creation of a new beginning to policing, that is the political character of Mr Gove,” Mr Atwood said.

Ulster Unionist peer Reg Empey said the election of Mr Gove would pose “no threat to our current arrangements”.

Speaking on the Andrew Marr Show on BBC on Sunday, Mr Gove said: “I am glad about the peace process in Northern Ireland but, looking back, I think it could have been handled in a different way.”