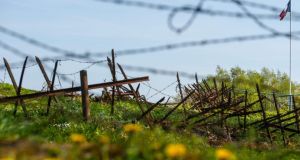 Rhys Thomas Prydderch was, in the eyes of his neighbours in Talgarth, “a man of Galilee”, loved for visiting the sick and aged and holding open-air religious revival meetings in the market square in the Welsh village.

Today, he lies in the Commonwealth war grave at Longuenesse Souvenir Cemetery at St Omer, southeast of Calais, one of many men of the King’s (Liverpool) Regiment who died in No Man’s Land in March, 1917.

Back in Talgarth, Prydderch, an ordained minister, is one of 25 names on the village’s war memorial, though their characters, the hopes and dreams, the lives unlived of the men themselves have drifted into the shadow as the decades have passed.

Looking around the village, Virginia Brown, who has delved into their histories, said: “Just imagine the pain that was here in the years after. Mothers, meeting . . . on the street, thinking of sons who would never come home.”

Nearly 40,000 Welsh men died in the war, out of the 280,000 who served, though there was no guarantee in the days before the conflict erupted in 1914 that the Welsh would volunteer in numbers.

Striking miners
The Welsh had been ambivalent about the British army. Welsh regiments recruited as much from Birmingham as Wales, while non-conformist congregations and liberalism – then strong in Wales, was hostile.

Meanwhile, the memory of the bitter Cambrian miners’ strike in 1910 was still raw; one where soldiers were ordered on to the streets of the colliery town Penygraig, north of Cardiff, to tackle strikers.

However, Belgium changed everything. In Merthyr Tydfil and Aberdare, locals shouted down the Labour MP Kier Hardie when he urged Britain to make peace. In Talgarth, local church leaders told men that it was their duty to fight.

Welsh man David Lloyd George, who became prime minister in 1916, led the drive for volunteers. Recruiting offices in Cardiff and Swansea were unable to cope with the numbers clamouring outside.

Ever the populist, Lloyd George told his fellows to look to their military past: to the Monmouth archers who wore a leek in their caps on the day they fought with Henry V’s “band of brothers” at Agincourt in 1415.

In September that year, he told a Welsh audience that he “would like to see a Welsh army in the field” from “the race that faced the Normans for hundreds of years in their struggle for freedom. I should like to see that race give a good taste of its quality in this struggle in Europe; and they are going to do it. I envy you young people your youth,” he told them.

‘You can only die once’
Soon, the letters came; bringing news of death and suffering; such as the one

sent to the mother of Lieut David Bernard Powell, who had left the family business, the Tower Hotel in Talgarth – still in operation today, cheerily declaring: “You can only die once.”

In it, Powell’s commanding officer told of how he had been hit by a sniper’s bullet: “I was with him when he got hit. The wound was in his side and although I saw it was serious I did not think it would prove fatal.”

In the hours after he died, the field hospital matron picked up pen and paper to offer words to a grieving Welsh mother, saying that his last words were “slightly wounded” and “my love”. He repeated “my love”, before drifting into unconsciousness.

On Sunday, the village’s walking festival included a tour of places that would have been passed every day by many of the Talgarth men, including the local Bethlehem Calvinistic Methodist Church.

There, the local choir sang songs – not hymns, but songs such as It’s a Long Way to Tipperary, or Hello, hello, who’s your Ladyfriend that brightened dark days, as choir leader Richard Walker told the audience gathered in the pews.

Just feet away from Walker hung a hymn board erected decades ago to honour one of the church’s own dead, Reuben Williams from Bailiau Bach Farm, a sheep farm several miles away in the Black Mountains.

His neighbours gathered in August 1917 in the same pews for his memorial, filing out later as Mrs Katie Morgan played the Dead March from Handel’s Saul.