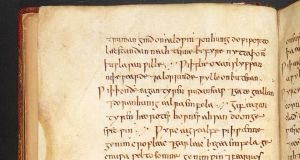 A garlic-based ‘potion’ listed in a 1,000-year-old Anglo-Saxon manuscript. Researchers in the University of Nottingham have found that the recipe is able to kill off the MRSA superbug. Photograph: The British Library Board (Royal 12 D xvii)/PA Wire

A garlic-based “potion” listed in a 1,000-year-old Anglo-Saxon manuscript has been found to kill off the MRSA superbug.

Microbiologists at the University of Nottingham say early trials of the 10th century remedy, which also contains cow bile, have yielded “astonishing” results.

The apparently homespun recipe, originally concocted as a treatment for eye infections, was spotted in a copy of Bald’s Leechbook, a medieval medical text held at the British Library.

In what experts from the university’s school of English and centre for biomolecular sciences acknowledge is an unusual research collaboration, tests have been conducted using a mixture of oxgall, wine and two species of allium - garlic, onion or leek.

Initial results of trials conducted at the University of Nottingham and at Texas Tech University show that the eye salve, while not 100 per cent effective, is “as good, if not better” than conventional antibiotics at tackling MRSA.

Data gathered during the testing shows that the mixture kills up to 90 per cent of MRSA bacteria.

Scientists believe its effectiveness is due to the combination of ingredients and “brewing” methods used in Anglo-Saxon times.

Dr Harrison said: “We thought that Bald’s eye salve might show a small amount of antibiotic activity, because each of the ingredients has been shown by other researchers to have some effect on [MRSA] bacteria in the lab.

“But we were absolutely blown away by just how effective the combination of ingredients was.

“We tested it in difficult conditions too - we let our artificial ‘infections’ grow into dense, mature populations called biofilms, where the individual cells bunch together and make a sticky coating that makes it hard for antibiotics to reach them.

“But unlike many modern antibiotics, Bald’s eye salve has the power to breach these defences.”

Dr Christina Lee, a member of the university’s institute for medieval research, came up with the idea of testing the ancient cure.

“We were genuinely astonished at the results of our experiments in the lab,” Dr Lee said.

“We believe modern research into disease can benefit from past responses and knowledge, which is largely contained in non-scientific writings.

“But the potential of these texts to contribute to addressing the challenges cannot be understood without the combined expertise of both the arts and science.”