Lorry driver who killed family while using phone gets 10 years 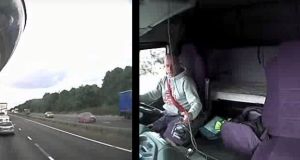 Dashcam still image from the day of the crash showing Tomasz Kroker looking at his mobile phone while driving his lorry just before he killed a woman and three children. Photograph: PA 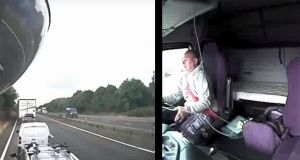 A still image showing Tomasz Kroker while driving his lorry just before he killed a woman and three children. Photograph: PA 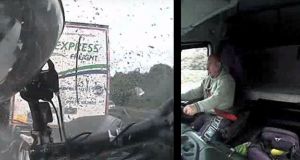 Dashcam showing Tomasz Kroker in his lorry as it crashes into a stationary car killing a woman and three children. Photograph: PA 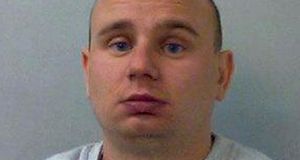 Tomasz Kroker was so distracted by his phone that he barely looked at the road for almost a kilometre before the crash, the court was told. Photograph: Thames Valley Police/PA Wire

A lorry driver who killed a woman and three children by ploughing into their stationary car while scrolling through music on his mobile phone has been jailed for 10 years.

Their car was shunted underneath the back of a heavy goods vehicle and crushed to a third of its size, immediately killing the family, from Bedfordshire, at the scene on the A34 dual carriageway north of Newbury in Berkshire.

He was sentenced at the same court on Monday.

The court had heard that Kroker, who himself had become a father five months before the incident, was so distracted by his phone that he barely looked at the road for almost a kilometre.

Passing sentence, Judge Maura McGowan said his attention had been so poor that he “might as well have had his eyes closed”.

Just an hour earlier he had signed a declaration to his employer, promising he would not use his phone at the wheel.

Kroker’s truck ploughed into a stationary queue of two lorries and four smaller vehicles which were stuck behind a slow-moving articulated lorry near the villages of East and West Ilsley at about 5.10pm.

A man was seriously injured and four other people were hurt in the incident.

Victim statement In a victim impact statement,Tracey Houghton’ family said the 10-year jail sentence “does not do justice to the crime committed”.

In a statement read on behalf of the family, Aimee Goldsmith’s mother, Kate Goldsmith, said: “Today Tomasz Kroker has been sentenced for killing much-loved members of our family. However, in our eyes, the sentence does not do justice to the crime committed. Tracey Houghton, her two sons, Ethan and Josh, and Aimee Goldsmith were innocent victims of his actions.

“On the 10th of August 2016, Mr Kroker made the decision to change his music on his phone whilst driving a lorry at 50mph. His lorry hit a queue of stationary traffic, killing four family members and seriously injuring another driver.

“In the moment Mr Kroker chose to look at his phone he caused a multiple-vehicle accident that endangered all surrounding road users and took the lives of Tracey, Ethan, Josh and my daughter Aimee.

“To all intents and purposes, Mr Kroker’s use of his mobile phone whilst driving turned his lorry into a lethal weapon. He was so distracted he made no attempt to slow down.”

Tears in court The court had been packed with members of the victims’ families and survivors of the crash, many of whom were in tears as prosecutor Charles Ward-Jackson recounted what happened that day.

As pictures and footage of the accident were shown to the court, some chose to leave the courtroom. Kroker himself wiped away tears and held his face in his hands as the more harrowing details of the incident were read out.

The family statement added: “The sentence of 10 years in prison will not ease our pain and suffering, nor we do we believe it will send a strong enough message to those who lack the self-restraint to not use their mobile phones whilst driving.

“Anyone using a mobile whilst driving is guilty of dangerous driving. It only takes a second of distraction to kill someone, destroying your life, your family’s lives, and those of your victim and their family.

“Today’s outcome must serve as a reminder to us all of our responsibilities every time we drive and that the decisions we make can be fatal. Our children lost their lives because of the reckless actions of Tomasz Kroker.

“But we are not the only family to have suffered due to what is perceived by many as minor, inconsequential crime – a crime that takes place on our roads every day.

“We urge you to make a personal commitment to stop using mobile phones whilst driving and make our roads safer for everyone.”