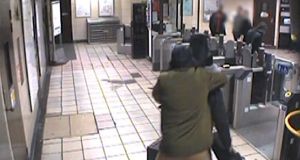 Undated handout still from CCTV issued by the Crown Prosecution Service of the moment that Somali-born Muhiddin Mire attacked Lyle Zimmerman, before lashing out at other travellers during a rampage at Leytonstone Tube station. Photograph: CPS/PA Wire

A man has been found guilty of trying to behead a random stranger at a Tube station after being inspired by the murder of Fusilier Lee Rigby.

Somali-born Muslim Muhiddin Mire (30), attacked 56-year-old musician Lyle Zimmerman with a rusty knife and threatened four other travellers as he ran amok through the ticket hall at Leytonstone Underground station in east London.

The incident was caught on shocking CCTV and mobile phone footage taken by a passer-by who carried on filming even as Mire lunged at him with the blade.

One onlooker shouted out “You ain’t no Muslim, bruv” after Mire claimed he was doing it for “my Syrian brothers” as police took him down with Tasers.

The court heard that minicab driver Mire had a history of mental illness and his psychosis involved the belief that he was being persecuted for his religion and stalked by MI5 and MI6.

He had images of soldier Lee Rigby and British Islamic State executioner Jihadi John on his Samsung phone, along with material linked to IS.

A jury at the Old Bailey found Mire, of Sansom Road, Leytonstone, guilty of attempted murder.

He had already admitted four counts of attempted wounding and an alternative count of wounding with intent to cause Mr Zimmerman grievous bodily harm.

On December 5th last year, Mr Zimmerman had stood out from the crowd in cowboy boots and hat, carrying a mandolin in one hand and an amplifier in the other and with a guitar strapped to his back. He was targeted by Mire as they travelled on the same train from Stratford back to Leytonstone, where the defendant lived alone on benefits.

VIDEO: Bystander shouts 'you aren't a Muslim' at man that attacked commuter in London tube station this evening. pic.twitter.com/u0q00ZQKa7

Mire followed him off the carriage and produced a black-handled knife with a serrated edge from his pocket.

As Mr Zimmerman approached the barriers, Mire grabbed him from behind and swung him around and on to the floor.

You ain’t no Muslim, bruv

Mire then kicked him repeatedly around the head and body as a woman nearby called out for him to stop.

As Mr Zimmerman lay defenceless on the ground, Mire crouched down and began to “saw” at his neck with the serrated blade in front of shocked passengers.

Giving evidence from behind a screen, the victim told the jury: “At the time my subjective impression was that I was being attacked by a crazy person, a mentally unwell person.”

A junior doctor on his way home rushed in to help stem the blood flowing from Mr Zimmerman’s neck wounds as Mire went up to street level. He continued to threaten members of the public, swinging his blade at Daniel Bielinski, who began filming events on his mobile phone.

Mire went on to lash out at Serena Valori and an unknown man before coming face to face with Russian security guard Andrius Sabaliauskas, who tried to talk to him.

But despite the efforts to calm him down, Mire tried to slash lift engineer David Pethers before police arrived with Tasers.

Mire ran at an officer and the security guard shouting: “This is for my Syrian brothers, I’m going to spill your blood,” before he was finally subdued.

An onlooker called out to Mire: “You ain’t no Muslim, bruv” — words which became famous in news reports and social media.

Mire, who suffered from psychotic episodes, had been referred to mental health services by his GP a month before the attack. The court heard he had paranoid delusions that he was being followed by MI5 and MI6 and was suffering from anxiety and depression.

During that time, Mire was spotted around the estate where he lived wearing traditional Muslim clothes rather than his usual jeans and T-shirt.

Mire stared ahead with a blank expression as the jury returned its verdict after just over a day of deliberations. The defendant, who had been flanked by several dock officers and an interpreter, was remanded in custody at Broadmoor secure psychiatric hospital.

Before adjourning for sentencing, Judge Nicholas Hilliard QC told jurors he would be highlighting the “public spiritedness” of the people who rushed in to help on the day of the attack. “It would have been very easy to continue one’s journey on, but that did not happen.”