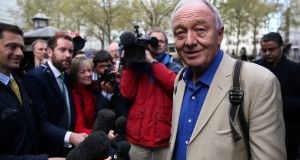 Former London mayor Ken Livingstone speaks to the media after appearing on the LBC radio station in London on Saturday. Photograph: Neil Hall/Reuters

Ken Livingstone said he regretted sparking a storm over anti-Semitism in the Labour Party but insisted it was a “nonsense” stirred by “embittered Blairites” to undermine Jeremy Corbyn.

Hours after the Opposition leader sought to put a lid on the row by announcing an independent investigation and a tightening of party rules, Mr Livingstone returned to the airwaves with another staunch defence of his contention that Hitler had been a Zionist.

The former mayor of London - a close ally of Mr Corbyn who was suspended by the party over the comments - said he was sorry if his views had upset Jewish people but that he had simply made a “statement of fact” that had been repeated two days before by Israeli premier Benjamin Netanyahu.

He said he was confident of being cleared to return to the party ranks after an investigation despite widespread calls for his expulsion, as there could be no evidence that he was anti-Semitic.

Former Liberty director Shami Chakrabarti has been appointed by Mr Corbyn to head a panel tasked with drawing up “a statement of principles and guidance about anti-Semitism and other forms of racism”.

A strengthened code of conduct will “make explicitly clear for the first time that Labour will not tolerate any form of racism, including anti-Semitism, in the party” and provide guidance on acceptable language.

Mr Corbyn insists there is no “crisis” within the party but his handling of anti-Semitism allegations, which have led to the suspension of Mr Livingstone and Bradford West MP Naz Shah and several other party members, has been criticised.

Mr Livingstone told LBC: “I really regret saying it because it has caused all this disruption. I never regret saying something that is true.

“How can I have hurt and offended the Jewish community when the prime minister of Israel said exactly the same thing?”

He said he had had “quite a lot of texts and Tweets from Jewish people saying ‘we would like to come along and support you at this inquiry’”.

He said: “If you look at what this is all about, it’s not about anti-Semitism in the Labour Party.

“What this is all about is actually the struggle of the embittered old Blairite MPs to try to get rid of Jeremy Corbyn.”

He said Mr Corbyn was “clearly not very happy” with the situation but said he would “take a bullet” to keep him in power and would not do any further media interviews on the issue - after two days in and out of TV studios and being publicly attacked by Labour MP John Mann.

“I am not doing any more interviews because the Labour Party has got to get away from all this nonsense and back to getting the vote out on Thursday,” he said.

“But the simple fact is that I did not create this problem; it was created by a bunch of embittered Blairite MPs who stirred up all this nonsense about anti-Semitists.

“The really appalling thing here is dishonest MPs who know that what I said is true have stirred up all this nonsense because they want to damage our chances at the local election so they then have a chance of undermining Jeremy.

“Now I don’t think that is going to happen.”

Labour Lead Thursday’s local elections are being presented by internal party critics as a key test of Mr Corbyn’s leadership — but experts predict a poor night at the polls for Labour. Announcing the review and proposed tighter party rules, he said the party had taken “decisive action” over allegations of anti-Semitism in the ranks, which have mounted during his time in charge.

“There is no place for anti-Semitism or any form of racism in the Labour Party, or anywhere in society,” he said. He wants a code of conduct to “make explicitly clear for the first time that Labour will not tolerate any form of racism, including anti-Semitism, in the party” and provide guidance on acceptable language.

The review — whose vice-chairman is Professor David Feldman, director of the Pears Institute for the Study of Anti-Semitism — is expected to consult with the Jewish community and other minorities and report within two months on issues such as “transparent compliance procedures” and training.

Mr Netanyahu provoked a storm of criticism last year when he suggested the Second World War Palestinian grand mufti of Jerusalem suggested the genocide of the Jews to Adolf Hitler in 1941. “Hitler didn’t want to exterminate the Jews at the time, he wanted to expel the Jews,” he is reported to have told the World Zionist Congress in Jerusalem.

Mr Livingstone told LBC: “The most amazing thing: in 1935 Hitler passes a law that bans any flag being flown in Germany except for the Swastika and the Zionist blue and white flag. “There is obviously some deal going on there.”

He said the issue within the party was restricted to “half a dozen saying and doing stupid things on the internet” who had all been expelled. MP Wes Streeting - one of the most vocal critics of Mr

Livingstone - was singled out for criticism. “I can’t believe Wes Streeting accusing me of anti-Semitism. When he got selected to stand for Parliament he invited me to come and campaign for him,” he told LBC.

Shadow cabinet minister Jonathan Ashworth said it was Mr Livingstone who was undermining Mr Corbyn, and urged him to “put a sock in it”.

“I will be out campaigning today with Labour members because we have got to win the elections next week. “To be frank, Ken is undermining Jeremy’s leadership, he is undermining the hundreds and thousands of activists who want us to win.

“He keeps saying he wants to be in his garden. Well, why isn’t he? Unless his garden is right next to all these TV and radio studios. “The National Executive Committee will follow due process, they will hear (his) case.” He told the BBC: “I was offended by Ken’s remarks. I think Ken crossed a line. I’m not a bitter former Blairite ... I am proud to serve in Jeremy’s shadow cabinet.”