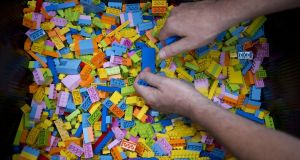 Lego says it has no plans for further promotional activity with the Daily Mail ‘in the foreseeable future’. Photograph: Laura Lean/PA Wire

Lego has said it will no longer be running toy giveaways with the Daily Mail, in response to a parent complaining of the newspaper’s “unashamed discrimination”.

Facebook user Bob Jones wrote to the Danish toy company last week raising concerns about Lego’s tie-ins with the newspaper in light of headlines that he said “create distrust of foreigners, blame immigrants for everything, and as of yesterday are now having a go at top judges in the UK for being gay while making a legal judgment”.

In a post that was shared on the social media site 22,000 times, he wrote: “Lego, to me has always been an inclusive product,” and asked the company whether it intended to continue brand partnerships with the Daily Mail.

On Saturday the company responded on both Twitter and Facebook: “We have finished the agreement with the Daily Mail and are not planning any future promotional activity with the newspaper.”

The company sent the same message to Stop Funding Hate, a campaign group that has been urging companies including John Lewis and the Co-Op to stop advertising in papers that it says are running “divisive hate campaigns”.

A Lego spokeswoman told the Guardian: “We spend a lot of time listening to what children have to say. And when parents and grandparents take the time to let us know how they feel, we always listen just as carefully.”

The company has no plans for further promotional activity with the paper “in the foreseeable future”, she added.

A spokesman for the Daily Mail told the Guardian: “Our agreement with Lego has finished and we have no plans around any promotional activity with Lego in the foreseeable future.” The paper has run giveaways of toys for the past two or three years, he said.

He emphasised that the agreement had run its course and there was no threat by Lego to pull advertising.

On Friday, Gary Lineker, the star of Walkers adverts, said he had held talks with the crisp brand about its advertising in the Sun, following a spat between the former footballer and the newspaper over his views on the refugee crisis.

He said people would have to “wait and see” about the outcome, but Walkers said: “Our advertising approach is not determined by the editorial stances of individual newspapers.”

Rosey Ellum, co-founder of Stop Funding Hate, welcomed Lego’s announcement. “It’s excellent they have listened to their customers,” she said.

Stop Funding Hate started in August out of concerns at coverage of issues including the refugee and migrant crisis in parts of the press. “The starting point was that we saw a situation where basically these newspapers were being more and more hateful towards certain groups.”

Ms Ellum rejected the suggestion that the campaign risked indirect censorship by giving brands influence over reporting. “We wouldn’t ask brands to have any say over editorial decisions,” she said.

“Companies choose not to advertise in lots of publications, for example pornography. They make these decisions every day. So it’s more a case of choosing where they advertise, which they already do.”