Lawson and Saatchi accused by former assistant of lying 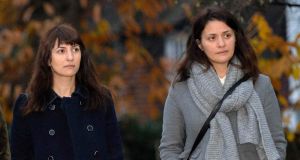 One of the personal assistants accused of defrauding Nigella Lawson and Charles Saatchi has accused them of lying under oath as she gave evidence in her trial.

The defendant, who along with her sister Francesca Grillo, 35, is accused of spending £685,000 on credit cards belonging to the celebrity couple to buy designer goods and luxury holidays for herself, made the claims as she spent a second day in the witness box at Isleworth Crown Court in west London.

As she began cross-examining her on Friday, prosecutor Jane Carpenter asked: “Ms Grillo, is it your evidence that Ms Lawson has lied to the court?”

“And you’re the one telling the truth?”

“And the other PAs, have they lied as well?”

The court previously heard that the defendants allege that Ms Lawson, who divorced multi- millionaire Mr Saatchi earlier this year, regularly snorted cocaine and smoked cannabis during her 10-year marriage.

But, giving evidence last week, Ms Lawson told jurors she had only taken cocaine with her late husband John Diamond when he found out he had terminal cancer, and on another occasion in July 2010 during her troubled marriage to Mr Saatchi.

Giving evidence on Thursday, Elisabetta Grillo said she regularly found signs that Ms Lawson was using cocaine, including a packet of white powder found in a toilet in the home she shared with Mr Diamond, as well as rolled-up banknotes and credit cards with white powder on them.

Asked if she had ever seen Ms Lawson taking drugs, Elisabetta — who is also known as Lisa — said: “No.”

But she told jurors she was aware that Ms Lawson had taken illegal substances.

The court heard that an original defence case statement for Elisabetta Grillo in August did not include allegations of Ms Lawson’s drug use because she did not want them raised in a court of law out of a “remnant of sympathy” for her former boss.

But an extra statement added in November did include the claims.

The additional statement, read to the court by Ms Grillo’s barrister Anthony Metzer QC, said: “The defendant will assert that the prosecution witness Nigella Lawson habitually indulged in the use of Class A and Class B drugs in addition to the abuse of prescription drugs throughout the time that the defendant was employed in the household.

“This evidence is of substantial importance as it explains why Ms Lawson initially consented, or appeared to consent, to the expenditure as the defendants were intimately connected to her private life and were aware of the drug use which she wanted to keep from her then-husband Charles Saatchi.

“Whilst it is not the defendant’s case that there was an explicit agreement for silence in return for aquiescence in expenditure, the intimate atmosphere created by such knowledge informed their relationship and what the defendant considered was permitted by Ms Lawson.”

The statement said the defendant suggested the reason why Ms Lawson had maintained she did not consent to the spending was because of her “fear of Mr Saatchi” and concern that he would think the spending had been allowed, either expressly or implied, by Ms Lawson because her drug use could be exposed.

The court heard that Ms Grillo had told her solicitors about the issue but did not originally want it in her defence case statement because she felt a “remnant of sympathy towards Ms Lawson” and so did not want it to be raised in a court of law.

But the statement added: “On mature reflection, given that this illicit use of drugs goes directly to her defence of actual or implied consent, she now expressly instructs that this matter should be raised to ensure fairness in the proceedings.”

Questioned about why she thought she was allowed to pay for personal expenditure using her company credit card, Ms Grillo said: “I have said this so many times — I was part of the family, I worked hard and Nigella wanted to show me how she appreciated my job and my friendship.

“I was allowed because I was part of the family.

“It’s not because I was in the house, because I worked for Nigella, or because they were rich.

Asked by prosecutor Jane Carpenter if she had taken advantage of Mr Saatchi and Ms Lawson, she said: “I never did that. Not to Nigella, not to Charles, especially Charles.”