Jo Cox was ‘to launch a report on nationalist radicals’ 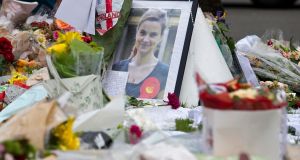 A memorial to murdered Labour MP Jo Cox outside the Houses of Parliament in London, England. Photograph: Justin Tallis/AFP/Getty Images

Jo Cox was planning to launch a report in British parliament on the dangers of nationalist radicals, according to reports.

The British Labour MP for Batley and Spen, who died after being shot and stabbed in the street outside her constituency surgery on Thursday, had also recorded a video about preventing Islamophobia, according to The London Times.

The report by Tell Mama, an organisation that monitors anti-Muslim incidents, warns of rising aggression by far-right nationalists and an increase in Islamophobia in the last year.

Mrs Cox was known for her commitment to causes such as the plight of Syrian refugees.

The London Times reports that on June 29th she planned to launch the report and play the video.

The video shows her talking about preventing Islamophobia and the problem that in her constituency “many of our young women don’t feel safe when they’re out on the street”.

The director of Tell Mama, Fiyaz Mughal, told the newspaper there were significant clusters of far-right activity in Yorkshire and that the charity’s annual report would detail an increase in anti-Muslim activity in the UK last year.

Mr Mughal said: “In the last 18 months South Yorkshire is one of the leading areas in the country [for Islamophobic incidents].”

Thomas Mair (52), from Birstall, appeared at Westminster Magistrates’ Court on Saturday charged with murdering Ms Cox, grievous bodily harm, possession of a firearm with intent to commit an indictable offence and possession of a knife.