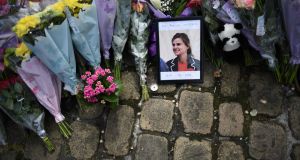 The man accused of murdering British Labour MP Jo Cox made a brief appearance via videolink at London’s Old Bailey criminal court on Monday, speaking only to confirm his name.

Thomas Mair was remanded in custody and will appear at the Old Bailey again on Thursday.

At an initial hearing in a lower court on Saturday, Mair said his name was “death to traitors, freedom for Britain”.

At Monday’s hearing, when asked if he was Thomas Mair, he said, “Yes I am.”

The murder of Cox, a 41-year-old mother of two children, has shocked the UK, eliciting condolences from leaders across the world and raising questions about the tone of campaigning before the referendum on EU membership which takes place on Thursday.

Cox, an ardent supporter of EU membership, was shot and stabbed in the street in her electoral district in northern England last Thursday.

Meanwhile, the pensioner who tried to save MP Jo Cox has been released from hospital as calls grow for him to be officially honoured for his bravery.

Bernard Kenny (77) was stabbed in the stomach as he came to the aid of Ms Cox when she was attacked outside the library in the centre of Birstall on Thursday.

The former miner was discharged from hospital on Monday, West Yorkshire Police said.

An online petition has been set up calling on the British government to award Mr Kenny the George Cross - the highest bravery honour that can be given to non-military personnel.

On Monday morning, it had been signed by more than 3,000 people.

1 School leggings controversy: Anatomy of a social media firestorm
2 Miriam Lord: Dramatic Al sets the stage for a dark day of reckoning
3 Publican blames Covid-19 as Dublin’s Dice Bar to shut for good
4 Metro South may be back on table as transport plans for Dublin are reviewed
5 Covid-19: Decision time on reopening plan as Varadkar questions cross-Border travel
Real news has value SUBSCRIBE