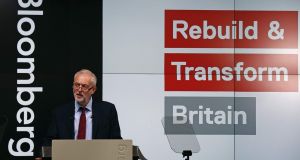 Jeremy Corbyn has urged the Conservative government to tear up European Union state aid rules after Britain leaves the European Union, describing them as “no longer valid”.

The Labour leader said that June’s referendum result was a rejection of the free market economic policies pursued by successive governments in Britain.

“Communities across the country rejected the status quo that had failed them. This is the failure of an entire economic model to provide the chances and opportunities to a generation of our people. Promoted for decades, this model argued that if taxes were slashed for big business and the mega-rich, then everyone would benefit,” he said.

Mr Corbyn said that the experience of low-pay, zero-hours contracts and a shortage of affordable homes had shown that people could no longer rely on free trade and free markets alone to deliver prosperity

“All of this presents a deep challenge to the social democratic and socialist tradition that Labour, new or old, has always been a part of.

“It punctures the old belief that it was possible simply to redistribute the proceeds a growing economy to pay for public services. It can no longer credibly be argued, for the majority of people, that free trade and free markets alone will deliver increased prosperity.

Mr Corbyn was speaking at Bloomberg’s London headquarters, the same venue where David Cameron three years ago promised to hold a referendum on Britain’s EU membership. He said that, freed from EU rules which prevent governments from support for business which could skew the single market, Britain could use public procurement to support British industry.

Mr Corbyn said later that he was not arguing that Britain must reject any trade deal with the EU which included state aid rules and he said he was sending his foreign affairs spokeswoman Emily Thornberry to study the Norwegian experience.

“We’re looking very closely at the Norwegian model. Not using their model, it’s learning the lessons from Norway. Maybe we can learn a lot from Norway,” he said.