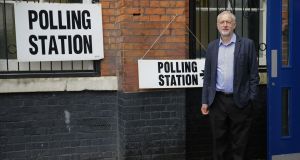 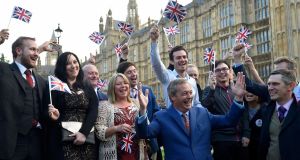 Nigel Farage (front), the leader of the United Kingdom Independence Party (Ukip) reacts with supporters, following the result of the EU referendum, outside the Houses of Parliament in London. Photograph: Toby Melville/Reuters 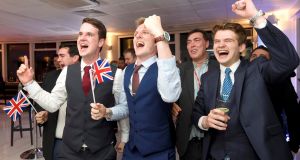 Leave supporters cheer results at a Leave.eu party after polling stations closed in the Referendum on the European Union in London. Photograph: Toby Melville/Reuters 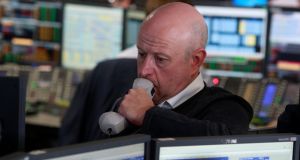 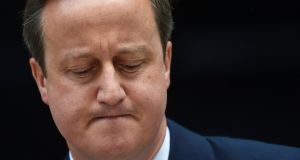 David Cameron has stepped down as prime minister following the defeat of the Remain side. Photograph: Toby Melville/Reuters 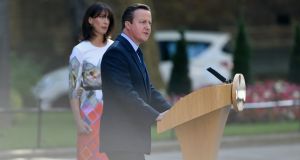 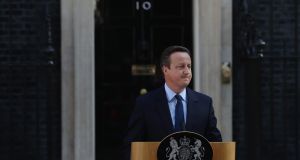 British prime minister David Cameron resigns on the steps of 10 Downing Street on June 24th, 2016 in London. The results from the historic EU referendum has now been declared and the United Kingdom has voted to LEAVE the European Union. Photograph: Dan Kitwood/Getty Images 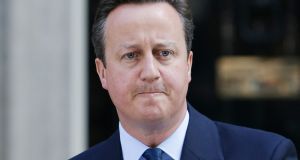 Prime minister David Cameron speaks outside 10 Downing Street, London, where he announced his resignation after Britain voted to leave the European Union in an historic referendum which has thrown Westminster politics into disarray and sent the pound tumbling on the world markets. Photograph: Daniel Leal-Olivas

Labour leader Jeremy Corbyn has rejected calls for his resignation amid frustration at his failure to galvanise the party’s traditional supporters to turn out for Remain.

Asked if he would resign, Mr Corbyn told Channel 4 News: “No, I’m carrying on.”

The UK has voted to leave the EU, prompting David Cameron to resign, Scotland to seek another independence referendum and top EU officials to call on the UK government to give effect to the referendum result “as soon as possible”.

In a joint statement by the heads of the European Commission, parliament and council, the EU’s top officials said that “any delay would unnecessarily prolong uncertainty”.

“We now expect the United Kingdom government to give effect to this decision of the British people as soon as possible, however painful that process may be,” it said.

US president Barack Obama said on Friday he respected the UK’s decision and the US relationship with Britain would endure.

The Leave camp’s victory prompted Mr Cameron to resign as British prime minister, after his Remain side lost; with more than 17 million voting Leave, compared with just over 16 million voting Remain.

“I do not think it would be right for me to be the captain that steers our country to its next destination,” he said.

Speaking outside 10 Downing Street, he said the British people had made a choice “that needs to be respected” and that all sides, both Remain and Leave have a duty to make the new situation work.

“Now that the decision has been made to leave, we need to find the best way,” he said.

Mr Cameron said it was not a decision he took lightly, and that he expected a new prime minister to be in place before the Conservative Party conference in October.

Mr Cameron called the vote on Brexit in 2013 under pressure from the anti-EU wing of his Conservative Party and Ukip, hoping to end decades of debate over the UK’s ties with Europe.

During his resignation speech, he moved to reassure both UK citizens living in the EU, and EU citizens in the UK that there would be “no immediate change in circumstances”.

The British decision to leave the EU “clearly has very significant implications for Ireland”, the Government said in a statement following the result.

“This result clearly has very significant implications for Ireland, as well as for Britain and for the European Union.”

The Dáil is to be recalled on Monday to discuss the fallout from the British decision to withdraw from the European Union, Taoiseach Enda Kenny has said.

The Government published a contingency plan for dealing with the effects of the referendum result. 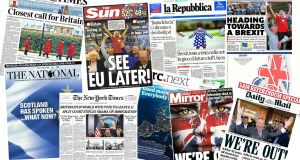 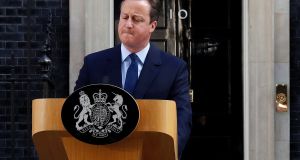 The Irish business community has reacted with disappointment to the result.

Lobby group Ibec said the UK vote is a “very significant blow the EU, which will lead to a potentially protracted and unwelcome period of uncertainty and instability in Europe”.

Mr McGuinness also called for a Border poll on a united Ireland.

Reacting to the result, German chancellor Angela Merkel has expressed “great regret” at the UK’s decision to leave the European Union and said the bloc must never forget that the foundation of European unity was the “idea of peace”.

French president François Hollande said the vote was “a painful decision that I profoundly regret,” but that France would work with the UK, “who is a friend”.

However he said that negotiations on Britain’s exit must be swift, adding: “The British vote is a tough test for Europe.”

Former taoiseach Bertie Ahern said he was bitterly disappointed with the result.

The result surprised Leave campaigners as well as most pollsters and political analysts.

London, Scotland and Northern Ireland voted strongly to remain in the EU.

But there were big majorities for Leave in other parts of the UK, particularly in the north of England, Wales and the English shires.

Ukip leader Nigel Farage told supporters that July 23rd would go down in history as Britain’s Independence Day, calling for it to become a national holiday.

“Dare to dream that the dawn is breaking on an independent United Kingdom,” he said.

The Scottish government will draw up legislation to allow a second independence referendum to be held, first minister Nicola Sturgeon has confirmed. While the UK as a whole voted to leave the European Union, Scots overwhelmingly opted to remain, with Ms Sturgeon declaring the result meant there had been a “significant and material change in the circumstances in which Scotland voted against independence” in 2014.

All 32 of Scotland’s local authorities voted to stay in the EU.

Motion of no confidence in Jeremy Corbyn

Two members of Britain’s main opposition Labour Party have submitted a motion of no confidence in their leader, Mr Corbyn, BBC television have reported.

The BBC said two members of the party, Margaret Hodge and Ann Coffey – had submitted the motion over his handling of the EU referendum campaign.

However, Mr Corbyn insisted he will be carrying on and “making the case for unity” ahead of a potential general election once Mr Cameron’s successor is chosen by the Conservatives.

The pound fell more than 10 per cent against the dollar to levels last seen in 1985, its biggest one-day fall in history, and European shares plummeted more than 8 per cent, headed for their biggest ever one-day fall.

Billions of dollars were wiped off European banks’ market value andoil prices slumped by more than 6 per cent following the result.

The US federal reserve said it was “carefully monitoring developments” and would pump extra money into global financial markets to soften the blow of the result on the US economy if needed.

Wales voted to leave the EU.

Brexiteers claimed victory on the western side of the Severn Bridge after polling 52.5 per cent of the votes compared with Remain’s 47.5 per cent.

First minister Carwyn Jones has said his urgent priority is to “protect the interests of Wales” and that he was “deeply disappointed” by the result.

He pledged to do all he could to protect jobs and keep Wales’ access to the European single market.

Northern Ireland hasvoted to remain in the EU, with 55.77 per cent of voters electing Remain.

Of the 18 constituencies, 11 voted Remain and seven voted Leave.