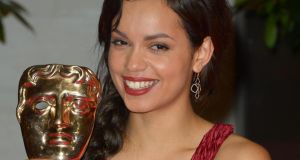 Georgina Campbell photographed iwth her Bafta award for her portrayal of a victim of domestic violence in Murdered by my Boyfriend. Photograph: Stuart C. Wilson/Getty Images 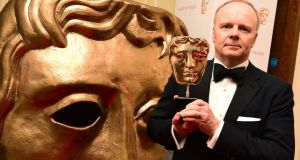 Jason Watkins with his Bafta award for his performance as the murder accused in ITV drama The Lost Honour of Christopher Jefferies. Photograph: Ian West/PA Wire

Sherlock might have won a gong but Benedict Cumberbatch again missed out on a television Bafta for his much-loved portrayal of the master detective.

Instead the leading actor role went to Jason Watkins for his performance as the murder accused in ITV’s drama The Lost Honour of Christopher Jefferies.

It was Cumberbatch’s third nomination for his performance in the hit BBC show, which instead took home the Radio Times Audience Award.

The Hollywood actor - who also missed out on an Oscar earlier this year - was not at the ceremony, with colleagues saying he stayed away to look after his new wife who is heavily-pregnant.

Watkins gave an emotional speech while collecting his gong for the drama, about the retired teacher who was vilified in the press over the murder of Joanna Yeates, despite being innocent.

He dedicated his award to his daughter Maude, who died from sepsis at the age of two on New Year’s Day in 2011.

“I’d like to thank David and Teresa Yeates for letting us have their daughter Joanna at the emotional heart of our piece and I hope that this has not been too painful a process for them although I hope that we can now share in the memory of their daughter,” he said.

“But there is one person that I am going to dedicate this to and along with my family ... I’m going to share this with our daughter who we lost just a few days funnily enough after Joanna Yeates’ death. If there is a reason why I’m standing here it is because of our Maudie, so thank you.”

Aside from Watkins own award - his first ever Bafta - the drama also took home the best mini-series award, emerging as a clear favourite of the night.

The awards show was held at the Theatre Royal Drury Lane in London.

Georgina Campbell was a surprise win of the night after claiming the leading actress award, which had been largely tipped to be taken by Sheridan Smith.

The young actress won for her portrayal of a domestic violence victim in BBC 3’s Murdered by My Boyfriend.

Shaking as she picked up her gong the little known actress said: “This is insane. The women who are in this category are absolutely brilliant.

“If I have the career they have in a few years time I will count myself very, very, lucky.”

BBC bosses will be left red-faced by the win - just as the corporation moves to axe the digital channel and replace it with an online-only service.

Dramas based on real life stories stood out against other nominations, with Marvellous also collecting two gongs.

The bio-pic told the uplifting story of Neil Baldwin, a Stoke City Football Club employee who refused to accept the limitations of his learning disability,

It won the Single Drama category while Gemma Jones picked up Best Supporting Actress for her portrayal of Neil’s mother Mary.

A clearly shocked Jones was close to tears as she collected her gong, the first nomination for the veteran actress since 1997.She told the audience: “I’d like to thank the real Neil who so generously allowed us to intrude on his extraordinary life.”

Comedian Jessica Hynes used her win for Best Female Performance in a Comedy Programme to make a stand against cuts to education and the arts.

The actress, who won her award for playing Siobhan Sharpe in comedy W1A, told the audience to rapturous applause: “I’m from a single parent family. I’m really worried about the cuts that are coming in state education and to people in low income families. Because I don’t feel low income means low talent, low imagination or low intelligence.”

Hynes later said in the winners’ room that her fears were centred around arts in higher education and said she was supporting schemes to help children from low income families pursue performing. “The arts is the first thing to go when the cuts and austerity hit,” she said.

Asked if she was disappointed with the election result, she simply nodded and said “yeah”.

The first actor of the night to pick up a coveted gong was Stephen Rea for his supporting role as Sir Hugh Hayden-Hoyle in the BBC Two’s The Honourable Woman.

The soap war was again won this year by ITV’s Coronation Street whose production team proudly collected the award for Soap and Continuing Drama. It was despite EastEnders’ who-dunnit plot around the murder of Lucy Beale.

Host Graham Norton laughed as he briefly put his duties to one side to collect the best comedy programme gong for his own Graham Norton Show. “Yay me”, he told the audience. “It’s much quicker when I win, I should win most things.”

Duo Ant and Dec twice found themselves on stage to collect awards - once to celebrate a win for their Saturday Night Takeaway show and again to recognise their performance as a comedy duo in the entertainment performance category.

The giggling pair said they were “thrilled” to have collected the awards and thanked their other halves for their support.

They made it clear they have no intention of slowing down, telling the audience: “Long may it continue.”

“I didn’t think I and Coronation Street would forge a bond tonight, but we have,” he said. “We’re both team operations.”

The news correspondent, who was honoured in recognition of his career spanning 40 years, added: “We are living in the Golden Age of journalism.

“This is the best and finest time ever to be a journalist. You can speak truth to power because you can prove it as never before.”

The event also saw producer and writer Jeff Pope given the special award and celebrated the career of broadcaster and TV critic Clive James, who is seriously ill.