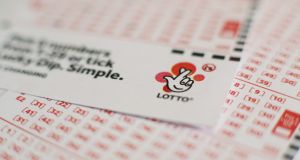 A woman has claimed she has the missing £33 million winning lottery ticket in the UK but put it through the wash. Photograph: Yui Mok/PA Wire

A woman has claimed she has the missing £33 million winning lottery ticket in the UK but put it through the wash.

She came forward after Camelot announced the winning numbers had been selected in Worcester and told residents to “check down the side of sofas”.

The woman, who refused to be named, claims the paper slip went through the washing machine in the pocket of a pair of jeans.

She presented the tattered remains to Ambleside News on Friday, where she said she bought it.

Natu Patel, who owns the newsagent, said: “The lady came in yesterday, she was rather nervous.

“We had to make sure she had the ticket with her. She told me the ticket had been in the wash and Camelot has said she has to send it through to them in writing.

“She showed it to me, because it’s been in the wash the ticket has slightly faded but hopefully they can sort it out.

“We put the ticket in card and in plastic to protect it and she has posted it off to Camelot. It’s up to them to verify it and hopefully pay her.”

The woman told The Times: “I’ve been a nervous wreck. I haven’t slept all night. Since I found it in my jeans pocket, my daughter and I have been drying it out with the hairdryer.

A Camelot spokeswoman confirmed it is aware of the case and said any claim has to be made in writing. “She has to go through the same process as anybody else,” she added.

“They basically need to submit a claim in writing within 30 days of the draw stating where they bought it, the time, date and any other details they can provide.

“We get quite a few of these, we get them with any unclaimed prizes and with this being quite a large amount we would expect several claims.”

No decision will be made by Camelot until 180 days after the draw was made, the time given anyone with an intact ticket to come forward.