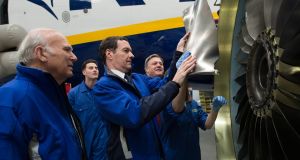 George Osborne (centre) with Ed Balls (right) and Vince Cable (left) in the Ryanair hangar at Stansted Airport: “The next think you know the Leave camp will be accusing us of faking the moon landings, kidnapping Shergar and covering up the existence of the Loch Ness monster.” Photograph: Stefan Rousseau/PA Wire

The economic impact of leaving the European Union has returned to the centre of Britain’s referendum debate, with both sides trading accusations of economic sabotage. Chancellor of the exchequer George Osborne joined forces with former Liberal Democrat business secretary Vince Cable and Labour’s Ed Balls to warn that Brexit would hit investment and jobs.

Speaking at an event hosted by Ryanair at London’s Stansted Airport, Mr Osborne said there was an international consensus behind the view that leaving the EU would hurt Britain’s economy.

“And what has been the response of the Leave campaign? They say it is all a massive conspiracy. So that’s everyone from Mark Carney to Christine Lagarde to Barack Obama to the entire editorial team at ITV to the staff at the IMF and OECD, to hundreds of economists, to a majority of leaders of small, medium and large firms – they think they are all part of some global stitch-up to give misinformation to the British people. The next think you know the Leave camp will be accusing us of faking the moon landings, kidnapping Shergar and covering up the existence of the Loch Ness monster,” he said.

Ryanair’s Michael O’Leary, who in 2011 described the EU as an “evil empire” that blocked innovation and entrepreneurship, said air fares would rise and investment would fall if Britain left the EU. Announcing the creation of 450 new jobs in Britain, he said such investment would be cut back if Britain votes to leave the EU on June 23.

“The single market has enabled Ryanair to lead the low-fare air travel revolution in Europe, as we bring millions of British citizens to Europe each year, and welcome millions of European visitors to Britain, and we are calling on everyone to turn out in large numbers and vote Remain,” he said.

The Leave campaign, which has struggled to make the economic case for Brexit, on Monday enlisted the support of 300 business owners. Former London mayor Boris Johnson used a visit to a clothing factory to compare the EU to a “badly-designed undergarment”, too tight in some places but dangerously loose in others. He said the Remain side who warned about the dangers of Brexit were in danger of talking down the British economy.

“I think the people who make this case are continually running Britain down,” he said.

“This is a fantastically robust economy, the fifth biggest in the world. And this fantastic company is selling on the basis of the skills of its workforce and the design that they produce and doing better and better around the world.”

Mr Johnson on Monday defended his claim that the EU was pursuing by different means a vision of European unity previously espoused by Napoleon and Hitler. But his predecessor as London mayor, Ken Livingstone, himself fresh from a controversy over Hitler comments, said Mr Johnson has his history wrong.

“Boris is a lot better informed about Ancient Greece and Rome than about modern history. There was never a plan for a United States of Europe under Hitler. What he wanted was actually a Greater Germany that absorbed neighbouring states, with Britain and France rendered subservient,” Mr Livingstone said.

The Irish Congress of Trade Unions (Ictu) warned on Monday that a British exit from the EU would have significant implications living standards and for workplace rights in both parts of Ireland. In a new briefing paper, Ictu acknowledges that the impact of Brexit would be greater in Northern Ireland but warns that no part of the island would be unaffected by the impact on jobs in the exporting industries.

Joe Biden has been sworn in as the 46th US president