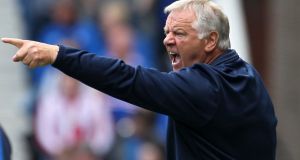 Millions – hang on James Alexander Gordon’s every word as he reads out the football results on BBC radio each Saturday afternoon, enjoying, if not the football, then the perfect enunciation, plus the perfectly-timed delay in delivery.

For 40 years, Gordon has carried his audiences north of the English border to the gloriously-titled world of Scottish football as he speaks of ‘Hamilton Academicals 2 . . . .Brechin City 3’, or the classic from 2000 of ‘Forfar 4 . . . . East Fife 5’.

However, Scottish football is in trouble. Last Wednesday, 2,879 fans sat in the stands on a bitterly-cold night for Dunfermline Athletic’s First Division home fixture against Falkirk, a game won 2-0 by the away side.

Just hours before, the 128-year-old club had gone into interim administration at Edinburgh’s Court of Sessions: a move that offered temporary relief from a £134,000 tax bill.

By Friday, eight of the first team had been made redundant, along with three of the club’s under-20 side.

“It’s the worst situation I’ve seen, I’m really sorry to say. We have to try and make the best of it. I’m dependent on benefactors and I’m also dependent on money coming in from the next home game,” said administrator Bryan Jackson on Friday.

Jackson, no stranger to Scottish football’s financial woes, having performed similar roles at Clyde, Clydebank, Motherwell and Dundee, said: “It’s going to be as challenging as anything I’ve done in the past.”

An increase in numbers entering the turnstiles at East End Park in the coming days may offer temporary respite to Dunfermline, though a sale of the club and an agreement with creditors is necessary for that to be anything more than a temporary fix.

However, the club’s place in the First Division is under question since Dundee suffered a 25-points deduction from Scottish football authorities when it went into administration three years ago, while other clubs, besides Glasgow Rangers, were relegated.

Some, like Dunfermline, are struggling to cope with court actions, including winding-up petitions and High Court writs, while others have been with striking-off notices because of persistent late filings of accounts.

Edinburgh-based Hearts of Midlothian held off a winding-up order in December after supporters raised more than £1 million – with £450,000 going to Revenue & Customs , though another £1.5 million will have to be found over the next three years. Now fans are mulling over plans to buy it.

Despite the difficulties, the situation is a little better than a year ago, if not much, says Begbies Traynor’s Ken Pattullo: “After a number of failures here in Scotland it was widely accepted that a sea-change was needed in the way clubs approached their finances.

“These survey results show that while clubs have started to address their financial management issues, the same worrying levels of distress are present as there were a year ago, but the game has coped with the disruption the Rangers administration caused last year.”

The demotion of Rangers to Scotland’s Third Division – where they are now officially known as Newco Rangers – was met with gleeful chortles from many of the fans of their bitter rivals, Celtic, but, in truth, the decades-old rivalry was the life-blood of each.


Falling attendances
Today, average Scottish Premier League attendances, along with the First and Second Divisions, have fallen from 13,861 in 2011/12 to just 9,901 now, though attendances in the lowest tier, the Third – boosted by Rangers’ presence, have increased.

“The Rangers relegation has sent average attendances in Division Three through the roof, as expected, with average gates up by over 1,000 per cent, but, of course, the majority of this benefit is felt by the Ibrox club,” Pattullo went on.

Reorganisation of Scotland’s entire league system is proposed, with the creation of just three leagues, though opposition is emerging on multiple fronts – with Rangers unhappy their punishment in the cellars could last for a year longer. They have just been promoted to the second tier.

Meanwhile, TV revenues for all the top clubs are down because of Rangers’ absence from the SPL, while the games are now being held at ever more inconvenient times for fans to suit demands made far away by programme schedulers.