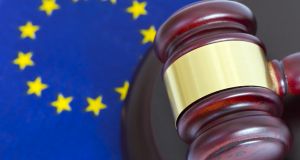 The court said the condition did not go beyond what is necessary to attain the objective of protecting its finances. Photograph: Getty Images

The European Union’s top court ruled on Tuesday that Britain can deny family allowances to foreign workers with children living abroad, one of the hot-button issues in Britain’s looming referendum on EU membership.

How Britain deals with asylum seekers and migrant workers has become one of the most contentious points of the Brexit campaign.

The biggest influx of refugees to Europe since the second World War has put the region’s migration system under severe pressure.

Tuesday’s ruling on Britain’s powers to limit benefits for migrant EU workers follows a decision at the top court on the legal rights for asylum seekers who are sent against their will to another EU nation.

The decision on welfare benefits is binding and cannot be appealed.

The European Court of Justice said a rule that makes allowances conditional on the right to reside in Britain might amount to discrimination, but could be justified by a need to protect public finances.

The European Commission had argued that the British process of checking whether claimants of child benefit and child tax credit are legally resident discriminates against foreign EU workers because British citizens are not checked in that way.

The court said the condition did not go beyond what is necessary to attain the objective of protecting its finances.