Police investigating the disappearance of Madeleine McCann have shifted the emphasis of their inquiry after discovering that a notorious presumed sighting of the girl being taken away from her holiday apartment was a false lead. 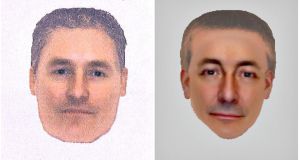 A combination photo shows two e-fit images released by the Metropolitan Police yesterday of a man they want to identify and trace in connection with their investigation into the disappearance of Madeleine McCann in 2007. Photograph: Metropolitan Police/Reuters

Police investigating the disappearance of Madeleine McCann have shifted the emphasis of their inquiry to an Irish family’s evidence after discovering that a notorious presumed sighting of the girl being taken away from her holiday apartment was a false lead.

Detectives from London’s Metropolitan police (the Met) now believe that a man with dark, collar-length hair seen carrying a pyjama-clad child almost outside the McCann family’s apartment in Praia da Luz, southern Portugal, at about 9.15pm on May 3rd, 2007, was in fact an innocent British holidaymaker returning his own child from a night creche.

In the light of what police describe as “a revelation moment”, altering six years of thinking about the case, investigating officers now believe Madeleine could have been taken up to 45 minutes later in the evening.

The discovery had brought “a shift of emphasis”, said Det Chief Insp Andy Redwood, leading the inquiry: “We’re almost certain now that this sighting is not the abductor. But very importantly, what it says is that from 9.15pm we’re able to allow the clock to continue forward. In doing so, things that were not seen as significant or have not received the same attention are now the centre of our focus.”

Irish couple
Drogheda couple Martin and Mary Smith were holidaying on the Algarve at the time of Madeleine’s disappearance with their daughter Aoife, son Peter and other family members. The man police now want to contact was spotted by the Smiths at about 10pm walking down the hill from the Ocean Club complex towards either the beach or the town centre, carrying a blond child aged about three or four, who was most probably wearing pyjamas.

The Smith family gave a statement to police soon after their holiday. The efits were compiled by private detectives in September 2008. However, Det Chief Insp Redwood said that for years the sighting was seen as “wrong place, wrong time” and thus unimportant.

Police are also seeking to identify a pair of blond men seen lurking around the holiday centre about the time of the disappearance, and a group of presumed bogus charity collectors who targeted nearby apartments – working on the possibility that Madeleine’s abduction was carefully planned.

But the key breakthrough since the Met launched its inquiry in July this year concerns Jane Tanner, among the group of friends dining with Kate and Gerry McCann on May 3rd as Madeleine and her younger twin siblings, Sean and Amelie, slept 50m away.

Ms Tanner went to check on her own children at about 9pm, around the same time Gerry McCann looked in on his – the last time the family saw Madeleine. About 15 minutes later, Ms Tanner recounted, she saw the man carrying a young child in pyjamas almost directly outside the McCanns’ apartment. From 2007 onwards, Portuguese and British police presumed any abduction most probably took place between 8.30pm, when the McCanns went to dinner, and 9.15pm.

A new police photograph of the man wearing similar clothes to those worn that evening is remarkably similar to an artist’s sketch based on Ms Tanner’s recollection.

The Tanner sighting had “dominated up to now”, admitted Det Chief Insp Redwood. “It has meant the focus was always done and dusted by about quarter past. Now it takes us forward to 10pm.”

Despite the detailed briefings, police warn that speculation about imminent arrests is premature. Det Chief Insp Redwood said: “It is about trying to understand who, precisely, these people are. Our absolute priority is to whittle them down.”

Officers do not consider the McCanns as suspects. – (Guardian service)