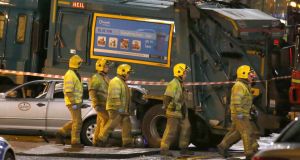 The scene in Glasgow’s George Square after a bin lorry crashed into a group of pedestrians and left six people dead. Photo: PA

The driver of a bin-lorry that went out of control killing six people and injuring ten in one of Glasgow’s busiest shopping districts during just a few seconds of horror just days before Christmas last year will not be prosecuted, prosecutors said yesterday.

Fifty-eight year-old Harry Clarke, who says that every day is now “a struggle”, became ill moments before the truck mounted the pavement before crashing into the Millennium Hotel in George Square, near one of the city’s railway stations.

“Despite its catastrophic consequences there is no evidence to suggest that the driver’s conduct at the time amounted to a breach of the criminal law,” the Scottish Crown Counsel ruled yesterday, saying that Glasgow City Council will also not face a health and safety prosecution.

The deaths took a heavy toll on Glasgow, which saw ten people die in November 2013 when a police helicopter crashed through the roof of one of the city’s best-known bars, Clutha. The investigation report into that incident has yet to be published.

The clearly-anguished Clarke is still unable to remember the seconds before the truck careered into its victims. He may have suffered a heart attack, though this is not yet confirmed. Public support for Clarke since the incident has been significant.