Discovery of 1,300-year-old coffins may shed light on early Christianity 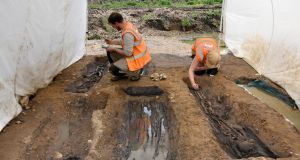 Archaeologists excavate graves lined with wooden planks and coffins made from hollowed-out tree trunks that have been found in a previously unknown Anglo-Saxon cemetery at Great Ryburgh, Norfolk. Photograph: PA 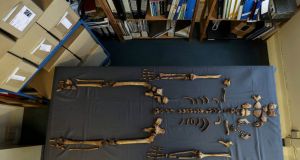 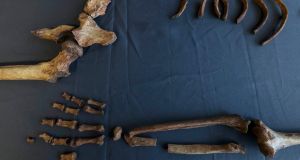 The find was characterised as “a dramatic example of how new evidence is helping to refine our knowledge of this fascinating period when Christianity and the Church were still developing on the ground”. Photograph: Reuters 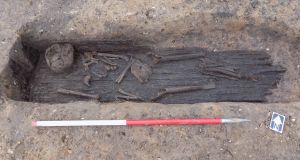 One of dozens of graves lined with wooden planks and coffins made from hollowed-out tree trunks that have been found in a previously unknown Anglo-Saxon cemetery at Great Ryburgh, Norfolk. Photograph: PA

The unearthing of 81 Anglo-Saxon coffins made from the hollowed-out trunks of oak trees may provide new insights into how people lived in the early days of Christianity in Britain, archaeologists said on Wednesday.

The coffins, which date back to the 7th-9th centuries, were uncovered at a previously unknown Anglo-Saxon cemetery on a site called Great Ryburgh in Norfolk, eastern England, where six rare plank-lined graves were also found.

Evidence suggesting the cemetery served a community of early Christians includes a timber structure thought to be a church or chapel, wooden grave markers and a lack of grave goods that would have been expected at pagan burial sites.

“This find is a dramatic example of how new evidence is helping to refine our knowledge of this fascinating period when Christianity and the Church were still developing on the ground,” said Tim Pestell, curator at Norwich Castle Museum in Norfolk, where the finds from the dig will be kept.

Few Anglo-Saxon coffins survive because wood normally decays over time, and evidence usually consists of staining in the ground from rotten wood. The site at Great Ryburgh had a combination of acidic sand and alkaline water that allowed the skeletons and wooden graves to survive.

Coffins made from hollowed-out tree trunks were first seen in Europe in the early Bronze Age and reappeared in the early Middle Ages. This is the first time examples of this type of coffin have been properly excavated and recorded by modern archaeologists in Britain.

The plank-lined graves are believed to be the earliest known examples in Britain.

Examination of the bones and wood is taking place at the Northampton offices of the Museum of London Archaeology (Mola).

“This find is absolutely unique in this country,” said Mola project manager Mark Holmes. “Finding wooden coffins of this period hasn’t happened before - it’s going to fill in an enormous amount of our knowledge of this period.”

Lead researcher on the dig Jim Fairclough said he hoped further analysis of the bones would reveal more of the individuals themselves, such as what their lifestyle was like and whether they had any family groups in the same cemetery.

“There are earlier Saxon cemeteries where there’s evidence wood was used in burials but all that remains is basically soil marks and staining where the wood has decayed,” he said.

“So this is the first time, especially in an early Christian context, where the wood coffins have been preserved.”

The excavation on private land at Great Ryburgh was launched to check for archaeological remains ahead of building work to create a lake and flood-defence system to boost biodiversity, alleviate flooding and create a new spot for anglers to fish.