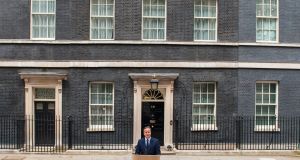 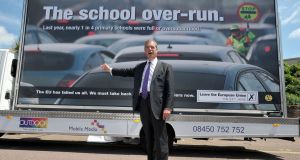 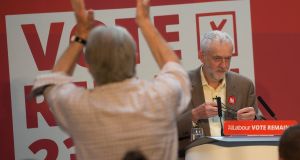 British prime minister David Cameron made a dramatic last-minute appeal to UK voters on Tuesday to back staying in the EU, as polls indicated the outcome was too close to call two days before the referendum.

Britons vote on Thursday on whether to quit the 28-nation bloc amid warnings from world leaders, investors and companies that a decision to leave would diminish the UK’s influence, unleash turmoil on markets and send shock waves around the Western world.

In a rare televised address outside his Downing Street office, Mr Cameron repeated his message that leaving the EU would jeopardise the UK’s economy and its national security, with fewer jobs, fewer allies and higher prices.

“Brits don’t quit,” he said, making a direct pitch to older voters, who are considered more eurosceptic and more likely to vote.

The Conservative prime minister’s intervention, which was not publicised in advance, came as an opinion poll showed support for remaining in the EU shrinking.

The Survation poll put the Remain camp just one percentage point ahead of the campaign for a so-called Brexit, a figure that is well within the margin of error.

Commentators said the hastily arranged appearance suggested Mr Cameron, who promised the referendum in 2013 under pressure from politicians in his party, and the Remain campaign were very worried about the outcome.

“Cameron is panicked, it’s out of his hands now,” Arron Banks, a multi-millionaire insurance tycoon who is funding one of the Leave campaigns, said on Twitter.

As each side sought to play its last trump cards, the pro-EU “Britain Stronger in Europe” campaign issued a final poster of a door leading into a dark void with the slogan: “Leave and there’s no going back.”

“For our children and their children we should be facing the problems of the world together and not alone,” he said.

Leave campaigners stepped up their relentless focus on what they call uncontrolled immigration, saying Mr Cameron had been warned four years ago his goal of reducing net arrivals was impossible due to EU rules.

Brexit or Bremain: How would you vote?

The anti-EU Ukip issued a poster showing a traffic jam with the message “The school overrun”, which said that nearly one in four of Britain’s primary schools were full or oversubscribed.

The EU - already shaken by differences over migration and the future of the euro zone - would lose its second-largest economy, one of its top two military powers and by far its richest financial centre if the UK voted to leave.

Billionaire George Soros said that a vote to leave would trigger a bigger, more disruptive devaluation than the fall on Black Wednesday, when market pressure forced sterling out of the European Exchange Rate Mechanism.

There could also be severe political ramifications, with many in the Brexit camp regarding Mr Cameron’s leadership as untenable if there is a vote to leave.

Justice secretary Michael Gove, the most senior cabinet minister campaigning for the Leave campaign, said he would “reflect” on his own position depending on the outcome.

Sterling has climbed in recent days on the back of more positive opinion polls for the Remain camp.

However, the pound fell from a 5 1/2-month high against the dollar and shares dipped after the Survation poll indicated falling support for the Remain camp.

An earlier ORB survey for the Daily Telegraph put support for Remain at 53 per cent, up 5 percentage points on the previous one, with support for Leave on 46 per cent, down three points.

“All the signs of ORB’s latest and final poll point to a referendum that will truly come down to the wire,” said Lynton Crosby, a political strategist who advised the ruling Conservative Party at the last national election in 2015.

Campaigning was suspended for three days after the murder of pro-EU Labour MP Jo Cox, who was shot and stabbed to death in her constituency in northern England last Thursday.

Some Leave campaigners have accused the Remain camp of exploiting her death as part of what they portray as a campaign of scaremongering by the establishment at home and abroad.

Turnout is likely to be key to the result, and the ORB poll found that Remain supporters, who had been regarded as being more apathetic, were increasingly motivated to vote.

After Ms Cox’s murder, polls indicated sentiment had swung back to the Remain campaign after a major shift towards Leave.

According to Betfair betting odds, the implied probability of a British vote to remain in the EU is 76 per cent, but analysts in the financial markets were more cautious.

“We will go into the vote without high confidence in predicting the outturn in either direction,” JP Morgan researcher Malcolm Barr said in a note to clients.

The Leave campaign claims it is the anti-establishment choice, and its message that EU membership has handed political control to Brussels and fuelled mass immigration appears to have struck a chord with many Britons.

That issue again gained prominence when Mr Cameron’s former close aide Steve Hilton said civil servants had explicitly told the prime minister four years ago that his target to cut net immigration to the tens of thousands was unachievable because of the free movement demanded by the EU.

The Remain camp has focused mostly on the economic benefits of EU membership and the risks posed by leaving.

Pro-EU leaders, including former British prime ministers Tony Blair and John Major, have warned that an exit could also trigger the break-up of the UK as another Scottish independence vote could be triggered if England pulled Scotland out of the EU.

While Remain can count on well-known faces from sport and entertainment for backing, the Leave camp has outstripped its rival in terms of donations.