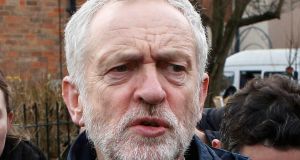 Jeremy Corbyn: The Labour leader has committed to a “new politics” which critics say would be inconsistent with a so-called “revenge reshuffle”. Photograph: Craig Brough/Reuters

Labour MPs have warned Jeremy Corbyn against a “revenge reshuffle” of his shadow cabinet, which would move leading critics of his leadership from their posts. The Labour leader is expected to reshuffle the front bench later this week and media leaks suggest he is planning to move shadow foreign secretary Hilary Benn and shadow defence secretary Maria Eagle.

Shadow culture secretary Michael Dugher, who is widely reported to be facing the sack, said a reshuffle aimed at sidelining dissent would be inconsistent with Mr Corbyn’s stated commitment to internal debate. Mr Dugher said that previous leaders had been reluctant to pursue major reshuffles.

“They do try and hold the party together, they do recognise that the Labour party is a broad church, not a religious cult, that you need people of different backgrounds and try and get the best possible talents,” he told the BBC.

Unlike the Labour leader, Ms Eagle opposes the abolition of the Trident nuclear missile programme, which will be the subject of a Commons vote in the spring. Mr Corbyn’s supporters say he is entitled to reshuffle his front bench, and that changes should not be perceived as acts of revenge on those who disagree with him.

Labour’s former policy coordinator Jon Cruddas, who nominated Mr Corbyn for the leadership but is not closely aligned to him, acknowledged that the party is suffering a profound crisis. But he said he understood why the leader might wish to avoid policy clashes with his shadow cabinet similar to that over Syria.

Two of the party’s newest MPs, elected in 2015, on Sunday joined those warning against a reshuffle, which Stephen Kinnock, MP for Aberavon and the son of former leader Neil Kinnock, said it would be a waste of time and energy.

“A reshuffle would simply leave people confused about what this fabled ‘new kind of politics’ is all about,” he wrote in The Observer. Writing in the same newspaper, Birmingham Yardley MP Jess Philipps said there was nothing new about Mr Corbyn’s “new politics”, which involved the same leaking and briefing as before.

“If Jeremy wants to get discipline through scare stories on reshuffles, I’d much rather he was straight-talking. If I were him I would stand up in the first PLP meeting of 2016 and bellow: ‘All of you, pack it in! Let’s stop bleeding moaning like a child who got clothes instead of an Xbox at Christmas and crack on with changing the sodding world’,” she wrote.