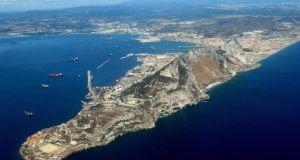 British prime minister David Cameron is “seriously concerned” by reports that Spain may introduce fees at the border with Gibraltar and close its airspace to planes using the British overseas territory’s airport, his spokesman said today.

Spanish foreign minister Jose Manuel Garcia-Margallo said in an interview on yesterday that Spain was considering a €50 charge to cross the border as well as tax investigations into Gibraltarians who own property in Spain.

Spain disputes Britain’s three centuries of sovereignty over Gibraltar, a territory on the southern tip of Spain that is home to close to 30,000 people with an economy dominated by off-shore banking, Internet gambling firms and tourism.

Diplomatic tension over the territory grew 10 days ago when boats from Gibraltar dumped blocks into the sea to create an artificial reef for fish at the mouth of the Mediterranean. Spain said the reef would block its fishing boats.

Britain has repeatedly said it will not compromise on the territory’s sovereignty. Cameron’s spokesman said the British foreign office had summoned the Spanish ambassador to London for talks on Friday to express Britain’s concern over the issue.

“We remain seriously concerned by events at the Spain/Gibraltar border,” the spokesman told reporters. “We are seeking an explanation from them (the Spanish government) regarding the reports that they might target Gibraltar with further measures.”