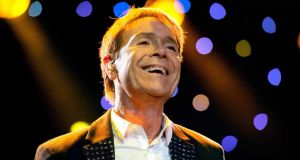 Cliff Richard said the claims against him were “absurd and untrue” and he had “never, in my life, assaulted anyone”. Photograph: Ferdy Damman/EPA

The police investigation into veteran singer Sir Cliff Richard has “increased significantly in size” and involves “more than one allegation”, South Yorkshire’s Chief Constable has said.

David Crompton said the “expanding nature” of the investigation meant he could not give a date when it would be concluded.

Sir Cliff said the claims against him were “absurd and untrue” and he had “never, in my life, assaulted anyone”.

The entertainer was interviewed under caution last year by detectives investigating a claim of a sex crime involving a young boy in the 1980s, but was not arrested or charged.

In a letter to Keith Vaz, chairman of the Commons Home Affairs Select Committee, Mr Crompton said the force was in regular contact with Sir Cliff’s lawyers.

But in a statement the 74-year-old singer said he had not been given details of the allegations against him.

Sir Cliff said: “I have no idea where these absurd and untrue allegations come from. The police have not disclosed details to me. I have never, in my life, assaulted anyone and I remain confident that the truth will prevail. I have cooperated fully with the police, and will, of course, continue to do so.

“Beyond stating that the allegations are completely false, it would not be appropriate for me to say anything further until the investigation has concluded, which I hope will be very soon. In the meantime, I would, again, like to thank everyone for supporting me through this unbelievably difficult period.”

The publication of the letter from Mr Crompton, dated February 10th, followed a scathing independent report into an agreement between South Yorkshire Police (SYP) and the BBC which led to a raid on the singer’s home being broadcast live around the world.

The independent report found the deal “certainly interfered with his privacy and may well have caused unnecessary distress”.

Former chief constable Andy Trotter said SYP should never have a made a deal with the broadcaster — a decision taken after BBC reporter Dan Johnson went to the force saying he knew they were investigating the veteran entertainer.

Mr Crompton said a Metropolitan Police investigation into the leak to the BBC had been unable to find the source.

In his letter, Mr Crompton said: “South Yorkshire Police detectives are in very regular contact with Sir Cliff Richard’s lawyers. Typically this involves a verbal update about once a fortnight.

“We have not written directly to Sir Cliff Richard. It is the responsibility of his lawyers to ensure he is fully briefed on the conversations which have taken place with investigators.

“This is an investigation which has increased significantly in size since its inception. Sir Cliff Richard’s lawyers are aware that there is more than one allegation.”

He added: “In view of the expanding nature of the investigation, it would be premature and potentially misleading to predict a likely date when it will be concluded; however, we are progressing as swiftly as possible.”

Two paragraphs of the letter from Mr Crompton were blacked out before being released.

Mr Trotter concluded: “I am content that those involved at SYP were motivated by trying to ensure the integrity of the investigation and by no other consideration.

“I came across nothing to suggest that the force was seeking publicity or involved in any improper relationships with the media.

“However, through a failure to foresee the consequences of their decisions, they put the force in a position which was difficult to defend and which could, and should, have been avoided.”