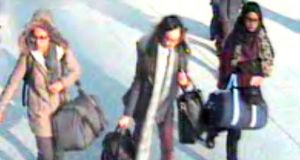 A spy working for a country in the US-led coalition fighting Islamic State who had helped three British girls cross into Syria to join the militant group. Photograph: Metropolitan Police/PA Wire

Turkey said it had caught a spy working for a country in the US-led coalition fighting Islamic State who had helped three British girls cross into Syria to join the militant group.

A European security source familiar with the case of the three girls said the person in question had a connection with the Canadian Security Intelligence Service (CSIS) spy agency.

However, a Canadian government source in Ottawa said the person was not a Canadian citizen and was not employed by CSIS. The source did not respond when asked whether the person had been working for CSIS.

Turkey’s foreign minister Mevlut Cavusoglu had told broadcaster A Haber in an interview: “Do you know who turned out to be the person helping these three girls cross into Syria and join ISIS?”

“He was caught. It turned out to be someone who works for the intelligence of a country from the coalition.”

Mr Cavusoglu did not specify which country the spy was working for but said it was not the European Union or the United States. The coalition also includes countries such as Saudi Arabia, Qatar, Jordan, Bahrain, Australia and Canada.

Mr Cavusoglu said he shared this information with his British counterpart, who had replied “as usual”.

A Turkish official who declined to be identified said the spy was now in custody.

“The person was working for the intelligence agency of a coalition country but is not a citizen of that country. The person was not a Turkish citizen either,” he said.

Islamic State seized large swathes of land last June, including territory close to the Turkish border. The US-led coalition is using mostly air power in an attempt to push the Sunni militant group back.

British police and the girls’ families have issued appeals for their daughters to return home after they flew to Istanbul from London on February 17th. Friends Amira Abase (15), Shamima Begum (15) and Kadiza Sultana (16) are thought to have since entered Syrian territory controlled by Islamic State.

Thousands of foreigners from more than 80 nations including Britain, other parts of Europe, China and the United States have joined the ranks of Islamic State and other radical groups in Syria and Iraq, many crossing through Turkey.

Turkey has said it needs more information from foreign intelligence agencies to intercept them, pointing to cases such as the three London schoolgirls who fled Britain.