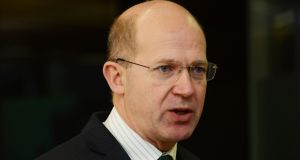 It is important that Irish people in the UK who are entitled to vote exercise their right to vote in the referendum, says British ambassador to Ireland Dominick Chilcott. Photograph: Cyril Byrne/The Irish Times

British support for remaining in the European Union is “wafer thin” but a successful renegotiation of the United Kingdom’s membership could persuade voters to stay, Britain’s ambassador to Ireland has said.

Dominick Chilcott also told a session on Brexit at the Fine Gael Ardfheis that immigration is chief among the issues shaping the attitudes of British citizens toward the EU.

Mr Chilcott said other “qualms” include a British “sense of history and who we are” and the potential further integration of Eurozone members to the disadvantage of member states who have their own currency.

Minister for Foreign Affairs Charlie Flanagan said a Brexit would have “drastic” consequences for Ireland in terms of trade, the relationship with the UK and the effect it could have on Northern Ireland.

Minister for European Affairs Dara Murphy said that while the Government wanted Britain to remain in the EU, it would primarily look after Irish interests.

While recent opinion polls have shown a narrow lead for the leaving the EU when British prime minister David Cameron holds the referendum on his country’s membership, which must take place by the end of 2017, Mr Chilcott said this is soft support.

“Opinion is pretty soft,” he said, adding that polls show that 50 per cent of respondents say a successful renegotiation by Mr Cameron, who initially said support for remaining in the EU is “wafer thin”, would have an effect on their thinking.

“The polling evidence is if we get the deal we are seeking to get in the negotiation, that will swing public opinion behind remaining.”

He said Mr Cameron’s proposed reforms will involve changes to EU treaties but will benefit all member states and not just the UK.

“Some of them will involve treaty change, which I know is a matter of concern for the Irish Government, ” he said, but added this could be done in a manner that would not involve a “free for all”.

He suggested the changes would not be implemented immediately but could wait until future, other treaty changes are ratified. Mr Chilcott said it is still an achievable goal for Britain to agree a deal at a meeting of the European Council next month but stressed this is not an absolute deadline.

“As David Cameron has made clear, getting the substance of the deal right is more important than the timing,” he said. “The aim is to keep the United Kingdom inside a reformed European Union.”

Immigration is one of the main concerns of British voters, he said. “There is a rate of immigration above which a society cannot absorb,” Mr Chilcott said, claiming that British public services are feeling the strain.

Net migration into Britain from other EU countries was 180,000 last year out of a total net figure of 330,000. Mr Chilcott said this was respectively the equivalent of the population of Belfast and Cork entering the UK in one year.

The priorities for Mr Cameron’s reforms are remove the United Kingdom from the EU commitment towards an “ever closer union”; ensuring a greater role for national parliaments; changing the welfare system so it is not an “artificial draw” for immigrants; to “supercharge negotiations” on trade deals with other blocs such as the US; and ensuring those outside the Eurozone do not lose influence in shaping the common market.

“This is a one shot referendum, there will be no second shot if the people vote the ‘wrong way’,” Mr Chilcott said.

Mr Chilcott also said it is important that Irish people in the UK who are entitled to vote, as well as the millions of British people of Irish descent, exercise their right to vote in the referendum.

He also asked Fine Gael delegates to ask any British citizens living in Ireland who they may encounter while canvassing for the general election to exercise their right to vote in the referendum.

They could do so if they have been registered to vote in Britain during the past 15 years, he said.