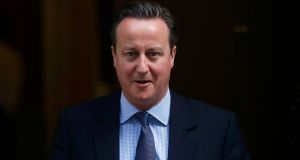 Britain’s prime minister David Cameron defends Taoiseach’s right to comment about the potential impact a British exit could have on the peace process. Photograph: Neil Hall/Reuters

David Cameron has suggested that Irish people working in the United Kingdom may not be affected by changes to welfare benefits in Britain’s renegotiation with the European Union.

In response to a question in the House of Commons from SDLP MP Mark Durkan, the British prime minister said: “I seem to recall from conversations I had with the Taoiseach that there are particular arrangements for the common travel area.”

A draft agreement published this week proposes that countries experiencing high levels of immigration from other EU states could limit welfare payments to new immigrants. Child benefit payments for children living in a migrant worker’s home country could be paid at a lower level than in Britain.

Earlier, Mr Cameron defended the Taoiseach’s right to comment about the potential impact a British exit from the EU could have on the peace process in Northern Ireland. Labour MP Kate Hoey said that Mr Kenny’s intervention was “not at all helpful, and indeed it was very uncomplimentary” to the people of Northern Ireland.

“He spoke up very strongly for Britain at the European Council, and I think he was quite influential in trying to build good will, and saying that we in the EU should recognise that if a country has a national interest at stake and needs things fixed, we must be a flexible enough organisation, because otherwise we will not be able to sort those things out.”

The prime minister took questions from MPs on the draft EU deal for two hours, with most of the criticism coming from his own Conservative backbenches. Mr Cameron said the agreement, if approved at this month’s EU summit in Brussels, would ensure that Britain could remain inside the parts of the EU that it likes and outside those it does not.

In response to a question from London mayor Boris Johnson, who is being wooed energetically by both sides ahead of the referendum, Mr Cameron suggested that he will introduce legislation to “put it beyond doubt that this House of Commons is sovereign”.

The prime minister did not specify how this might be done but one option is to give Britain’s supreme court a role similar Germany’s constitutional court, which can reject EU legislation if it is incompatible with the German constitution.

Mr Cameron issued his strongest hint so far that he hopes to hold the referendum on June 23rd, rejecting a joint plea from the first ministers of Scotland, Wales and Northern Ireland to delay the vote until further after May’s regional and local elections.