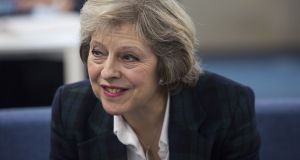 Britain’s prime minister Theresa May, whose government has no Brexit plan, according to a leaked memo. Photograph: Jack Taylor/PA Wire

The British government is struggling to cope with the scale of work generated by the Brexit vote and the lack of a common strategy among cabinet ministers, according to a report about a leaked cabinet office memo.

The note found that departments were working on more than 500 projects related to leaving the EU and may need to hire an extra 30,000 civil servants to deal with the additional work.

It identified a tendency by prime minister Theresa May to “draw in decisions and settle matters herself” as a strategy that could not be sustained, and highlighted divisions between the three Brexit ministers – Liam Fox, Boris Johnson and David Davis – and the chancellor, Philip Hammond, and his ally Greg Clark, the business secretary.

The note, leaked to the London Times and said to be dated November 7th, also claimed that “no common strategy has emerged” on Brexit between departments despite extended debate among the permanent secretaries who head Whitehall departments.

In addition, it said major industry players were expected to “point a gun to the government’s head” to get what they wanted after the carmaker Nissan was given assurances that it would not lose out from investing in Britain after Brexit.

It is understood the report was written by a consultant at the professional services firm Deloitte. A government source said it was “unsolicited” and its contents were not recognised.

Chris Grayling, the transport secretary, who sits on the government’s Brexit cabinet committee, said he had no idea where the report had come from and denied it had been commissioned by ministers.

Asked if the government was planning to hire 30,000 civil servants to cope with the extra pressures of the negotiations, Mr Grayling said: “I have not seen anything to suggest that is the case. We have got people in my department [and] in other departments working with the Brexit department. I don’t know what 30,000 extra people would do.”

A government spokesman also denied the existence of an official memo, which the Times said had been drafted by an outside consultant. The spokesman said: “This is not a government report and we don’t recognise the claims made in it. We are focused on getting on with the job of delivering Brexit and making a success of it.”

It is understood not to have been seen by ministers or commissioned as an official report by the cabinet office.

The note appears to be one of a number of recent leaks from the heart of government discussing dissent among senior figures about how Ms May should approach Brexit.

The prime minister has promised to start the process of leaving the EU by the end of March next year but declined to reveal details of her approach, beyond saying there must be a bespoke deal to allow immigration controls as well as maintaining access to the single market.

The Liberal Democrat leader, Tim Farron, said the leaked report showed a “shambles at the heart of government” over the direction of Brexit. “It’s time for the prime minister to stop being led astray by her warring cabinet,” he said. “Otherwise her government is heading for the worst possible outcome: a reckless, destructive Brexit that will do untold damage to British jobs and the economy.”