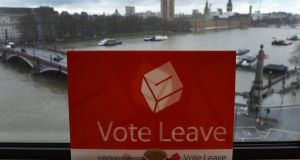 A Vote Leave campaign poster on a window ledge at the Vote Leave offices in London. The new designation means that Vote Leave will be allowed to spend up to £7 million during the campaign, can send out one mailshot to every household in the country and will be allocated political broadcast slots. Photograph: Andy Rain/EPA

Britain’s Electoral Commission has chosen the Conservative-led Vote Leave to as the official campaign calling for a vote to leave the EU in June’s referendum. But Arron Banks, the multimillionaire Ukip donor behind the rival group Grassroots Out (GO) has said he will seek a judicial review of the decision, a move that could, if successful, put the referendum back until October.

Mr Banks said he was unhappy with a number of elements of the commission’s decision and about a tweet sent out by a Conservative official the night before the announcement, saying that Vote Leave had won the designation.

“The tweeting by Steve Bell, the chairman of the Conservative Party Convention, that Vote Leave had been given the designation the night before of the official announcement smells of political corruption from our high-minded establishment and cannot be allowed to pass without challenge,” Mr Banks said.

“There are a number of judgments according to the Electoral Commission’s own criteria that do not make sense and we shall be raising those inconsistencies in our action.

“It is to be regretted that this process may put the referendum back until October but if we are to avoid the most important vote of our lives being rigged then I feel duty bound to take this course of action,” he added.

The commission chose Britain Stronger in Europe, the sole applicant on the Remain side, as the official campaign to argue the case for staying in the EU. It said it chose Vote Leave, which is chaired by justice secretary Michael Gove, because it seemed to represent those campaigning for Brexit to the greatest extent.

“We received two high quality applications on the ‘Leave’ side, from ‘Vote Leave Ltd’ and ‘The Go Movement Ltd’. After careful consideration, the commission decided that ‘Vote Leave Ltd’ better demonstrated that it has the structures in place to ensure the views of other campaigners are represented in the delivery of its campaign. It therefore represents, to a greater extent than ‘Go Movement Ltd’, those campaigning for the ‘Leave’ outcome, which is the test we must apply. We encourage all campaigners to now focus on engaging voters on the historic decision they will have to take on June 23rd,” said the commission’s chief executive, Claire Bassett.

“The decision of Ukip to back Grassroots Out was on the basis that they saw the importance of the immigration issue in this referendum, and that we wanted to reach out across the country at a grassroots level and work with everyone from the left, centre and right of British politics to get our country out of the EU. I believe this approach is the only way the Leave side can win this referendum,” he said.