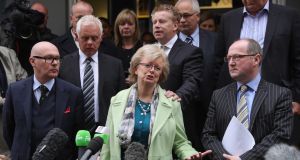 The woman who led the successful campaign to reopen the inquest into the 1974 Birmingham pub bombings has called on the men responsible for planting the bombs to come forward and tell the truth about what happened.

Julie Hambleton, whose sister Maxine died when bombs exploded in two crowded pubs in the city, appealed directly to the three surviving bombers who have been reported to be living in Dublin.

“Come forward, do the right thing. If you have any level of humanity and any moral compass, then by rights, you should come forward,” she said.

“They ran away like cowards and have been hiding in full daylight among their fellow citizens in Ireland, apparently with their freedom, while our loved ones are well dead and buried.”

Victims’ relatives wept and hugged one another when the coroner announced her decision.

It comes 25 years after the Birmingham Six, who were wrongly convicted for the bombings, had their convictions overturned and were released from prison.

The Provisional IRA has never formally admitted responsibility for the murders, although senior figures in the organisation have said it was one of its operations.

Five men have been named in media reports as having carried out the bombings, two of whom are dead, while three are said to be living in Dublin.

West Midlands Police, who tried to block the reopening of the inquest, said yesterday it would support the fresh inquest but expressed little hope of bringing those responsible for the bombings to justice.

“Despite an intense scrutiny we have not been able to see, at this time, a prospect of doing this. That has been an authentic and painstaking search for the truth,” chief constable Dave Thompson said.

“We have not nor will not close this investigation. West Midlands Police will support this inquiry as we have done through the recent hearings by the coroner . . . I hope the new inquest provides answers to families.”

Paddy Hill, one of the Birmingham Six who spent 16 years in jail before his conviction was quashed, said he was pleased that the families now had a chance of discovering the truth about the bombings.