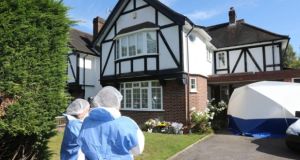 Forensic officers outside the home of the al- Hilli family in Claygate, Surrey, in September 2012. Photograph: Steve Parsons/PA Wire

The older brother of a British man gunned down in the Alps with his wife and mother-in-law has accused French police of “covering up” the truth about the killings.

Zaid al-Hilli (53), is a suspect in the mysterious murders of Saad al-Hilli, wife Ikbal and her mother Suhaila al-Allaf. He is due to answer police bail on Wednesday.

Speaking out for the first time, Mr al-Hilli denied he was behind the brutal attack and said he believes the intended target was a local cyclist also found dead at the scene on September 5th last year near Lake Annecy.

Investigators have repeatedly claimed that Sylvain Mollier was in the wrong place at the wrong time and pointed to a family feud between the al-Hilli brothers as a key line of inquiry.

Interviewed for a BBC Panorama documentary to be aired tomorrow, Mr al-Hilli said: “They are covering up for someone in France in that region and they know it.

“Sylvain Mollier was involved in family disputes and was an outsider to (his) rich family. There is something more to it locally - most crime has local roots.”

Mr al-Hilli, from Chessington in south-west London, offered to take a lie-detector test to verify his own account.

He also revealed that he has refused to go to France to meet Annecy prosecutor Eric Maillaud, telling the Sunday Times: “The French, I don’t trust them at all.

“My brother was killed there in that region and I am not going to take the risk.”

The horrific murder scene was discovered by cyclist Brett Martin, who found Iraqi-born Mr Al-Hilli (50) his 47-year-old dentist wife and her elderly mother blasted to death in their BMW.

The al-Hilli’s first-born daughter Zainab was shot in the shoulder and beaten, but survived.

Her four-year-old sister Zeena lay hidden under her mother’s corpse and was only discovered eight hours after the murders.

After the killings, speculation was rife about a dispute between the al-Hilli brothers over their inheritance.

Zaid, a father of one, was left half of the £825,000 home in Claygate, Surrey, where Saad and his family lived after their mother died from a heart attack in 2003.

He claims that in 2011 the matter drove a wedge between them when his brother began to demand that share of the property “there and then” and pinned him down during a row in October that year.

The two men never spoke again except through lawyers, but Mr al-Hilli denied rumours that he had threatened to kill his brother.

He said he knew little about a Swiss bank account containing the proceeds from their father’s business in Iraq and would not comment on claims he attempted to access it using an expired card or tried to fake their father’s will.