Brussels attacker note: ‘He that waits risks ending up in a cell’ 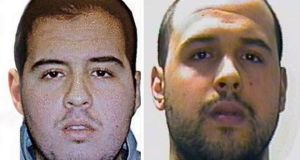 The sibling suicide bombers behind Tuesday’s Brussels massacre were aware police were after them an left behind a suicide note and “sizeable” criminal records.

Belgian nationals Ibrahim and Khalid el-Bakraoui detonated bombs within an hour of each other on Tuesday morning at Zaventem airport and, 9.5 kilometres away, at Maelbeek station in the Brussels EU quarter.

Police said they were still hunting for a third man, seen in a white jacket in airport surveillance footage.

Investigators said they found a note from Ibrahim El Bakraoui (29), on a laptop disposed in a bin, suggesting the Brussels attacks were brought forward after police raids last week in the Belgian capital.

“Always on the run, not knowing what to do any more, being looked for everywhere, not being safe any longer,” wrote Ibrahim El Bakraoui, according to police. “He that waits around any longer risks ending up next to the person in a cell.”

After 24 hours of manhunts and raids, prosecutors held a press conference on Wednesday afternoon to present the facts of the twin attacks.

The first blast took place at 7.58am local time on Tuesday near departures desk 11 and, nine seconds later, there was a second blast near desk two.

Besides the bombers, the Zaventem blasts killed around a dozen people and injured 90.

Just over an hour later Ibrahim el-Bakraoui’s younger brouther Khalid (27) triggered a third explosion in the carriage of a metro train at Maelbeek station in the EU quarter. At least 14 people died in this third blast, with more than 130 injured, many seriously.

Prosecutors confirmed that Ibrahim el-Bakraoui, the middle figure in a CCTV image released to media, was one of those responsible for the blast, killing himself and 11 others and leaving more than 90 injured.

Of the three suspects in airport CCTV footage only Ibrahim el-Bakraoui, in the centre of the still image, has been identified.

The identity of a second suspected suicide bomber in the left of the image was not yet known. A third suspect, seen on the right of the CCTV image in a light-coloured jacket, was not identified by the prosecutor although media organisations named him as Najim Laachraoui (24).

Police say one of the three bombers in the CCTV footage ran from the terminal after abandoning his suitcase bomb, which became unstable and detonated a short time later.

The suspected bombers travelled to the airport from the Schaerbeek district in a taxi.

After a tip-off from a taxi driver, police raided their apartment and discovered a laptop discarded in a bin, 15 kilograms of explosives, nails, and other material for making bombs, in addition to a flag of the Islamic State terrorist group.

The Islamist group claimed responsibility for the Brussels attacks, adding: “What is coming is worse and more bitter.”

After their overnight searches in Schaerbeek, Brussels police were still holding one person for questioning and released another. According to Belgian state broadcaster RTBF, Khalid El Bakraoui supplied guns and bullets for the Paris attacks and rented another apartment. A police raid last week lead them to Salah Abdeslam, a suspected ringleader of last November’s Paris attacks. Najim Laachraoui is also suspected of involvement in the Paris attacks: his DNA was found in a further hideout used by Paris attack perpetrators. As police continued their investigation, and Belgians held a minute’s silence at midday to remember the victims, visiting French Prime Minister Manuel Vals called for “massive” investment in security systems. He demanded greater co-ordination of European intelligence and police work, including air travel passenger name record (PNR) database. He urged the European parliament to back the plan, saying it would protect civil liberties while allowing authorities track terrorists. “We would have had a good chance to intercept a number of individuals, if PNR had existed,” he said in Brussels. Ahead of his visit, Mr Valls repeated on French radio that a “war that terrorism has declared not only on France and on Europe, but on the world”. “We must be able to face the extension of radical Islamism ... that spreads in some of our neighbourhoods and perverts our youth,” he said.