Sydney Opera House cost most to go green in 2014 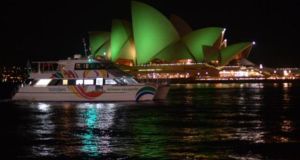 Tourism Ireland spent about €65,000 on greening over 120 buildings and monuments worldwide, including the Sydney Opera House and the Empire State Building as part of an international promotion of our national day. Photograph: Getty Images

Tourism Ireland spent about €65,000 on greening more than 120 buildings and monuments worldwide, including the Taj Mahal, the Pyramids and the Empire State Building as part of an international promotion of our national day.

Some global attractions adopted a charitable approach towards the requests, but others charged thousands to allow the inclusion of their property in the advertising initiative.

Sydney Opera House, which was the first global landmark to turn emerald green back in 2010, charged Tourism Ireland €8,000 to light up the venue in 2014.

Despite our proximity to Britain, neighbourly generosity didn’t quite extend to the operators of the London Eye, which charged €6,500 to illuminate. Other fees charged included €3,000 for the Sphinx and Pyramids in Egypt, €2,570 for South Africa’s Table Mountain, and €2,379 for the Leaning Tower of Pisa.

The Empire State Building, Niagara Falls and the Las Vegas “Welcome” sign went green for free, as did Munich’s Allianz Arena, Sleeping Beauty’s Castle in Disneyland Paris, the Taj Mahal Palace Hotel and a host of other sites worldwide, according to Tourism Ireland.

Domestically, 28 landmarks, including Áras an Uachtaráin, Kilkenny Castle and the Four Courts joined in the movement last year.

Figures released by the Office of Public Works to The Irish Times show that €30,000 was spent turning Irish buildings green, which equates to an average cost of more than €1,000 per “greening”, compared to a fee of about €500 internationally.

A Public Works spokeswoman said much of the €30,000 was spent on installation equipment for the lights, which would be reused in future. An exact breakdown of costs was not available .

Across the world, 150 locations will turn green during this St Patrick’s Day period. New sites include Sacré Coeur in Paris, Rome’s Colosseum and Sydney’s town hall.