Putting manners on the merchants of death 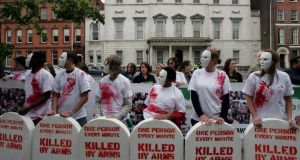 A protest outside the Dáil in 2006, organised by Amnesty International and Oxfam Ireland. Photograph: Eric Luke

The success this week of the US National Rifle Association in forcing a retreat by US president Barack Obama on a ban on assault weapons sent a ripple of disappointment through a key UN arms control meeting in New York.

The NRA’s opposition to an international conventional arms trade treaty (ATT) had contributed to the scuppering of a July negotiation, and delegates at the resumed talks this week have been hoping that, freed of election pressure, Obama will be more willing to back a treaty with real teeth. The evidence was ominous.

The NRA says the treaty “threatens” the precious second amendment right to gun ownership, despite its explicit language guaranteeing states’ right to control their domestic arrangements. NRA lobbyists are also seeking treaty language that would distinguish between weapons sales for civilian and military use. Groups including Amnesty International say such a distinction would drive a coach and horses through any serious regulation. But the NRA’s grip on US politics is such that any treaty may face an uphill ratification struggle on which Obama may not wish to expend political capital.

In New York, the most important UN initiative yet on the $70 billion (€53.88 billion) arms trade sees negotiators from 150 countries at work ahead of a deadline of March 28th.


Transfer of weapons
The ATT will regulate the international transfer of at least eight categories of weapons, including small arms, tanks, warships, combat aircraft, missiles and missile launchers. It would require states to determine whether weapons they sell would be used to commit serious human rights violations, in terrorism or transnational organised crime, that they do not violate widely flouted embargoes, and that they are not illegally diverted.

As UN secretary general Ban Ki-moon pointed out at the beginning of the conference, while the trade in armchairs is regulated, the trade in arms is not. Campaigners say one person dies every minute worldwide as a result of armed violence, and the trade feeds civil war, criminality, terrorism and human rights abuses by governments and non-state actors alike.

In the developing world, proliferating small arms force governments to devote up to three times more share of their GDP to law enforcement than more affluent countries. In Africa armed violence costs countries an estimated $18 billion a year, a sum equivalent to its total aid receipts.

The US accounts for some 30 per cent of the world’s arms exports, followed by Russia (26 per cent). Germany and France are in third and fourth place, with China having replaced Britain as number five. More than 1,000 companies in 100 countries are involved in small arms production, with significant producers in about 30 countries.


Divisions
Inevitably, arguments on setting limits to the trade tend to divide between those commercially involved in it and those such as the EU, and Ireland, who see the treaty as a humanitarian mechanism.

When the talks broke down UN Security Council members Russia, China and the US said they needed more time. Countries such as Syria, Iran, Egypt, Algeria and North Korea oppose the process.

Russia and China are ambivalent about language that could be interpreted as banning weapons trade with human rights violators, saying such a distinction is subjective. To be effective, campaigners argue, the ATT must have a “golden rule” to do precisely that, and Irish and EU diplomats are working on strengthening humanitarian language on issues such as gender-based violence.

The resumption of the talks, deemed optimistically by the UN the “final” treaty talks, has been broadly positive, diplomats say, although a sharp hardening of positions is expected as the 28th looms.

The devil is in the detail of the text and its definitions, and on closing loopholes that are seen as making the diversion of legally traded weapons easy. Governments should be required, campaigners argue, to perform risk assessments before authorising an arms transfer, and to track the use of exported arms.

Critical for supporters of a strong treaty is the inclusion of munitions and spare parts in the definition of arms. The world ammunition market is estimated at $4 billion a year, with the US accounting for half of that – it argues such regulation is impractical even though it regulates its own export and import of ammunition.

If the conference fails to agree a treaty because it cannot reach a consensus, it can be put to a vote in the UN General Assembly. But a treaty that is not ratified by the big players in the trade such as the US will be little more than a piece of paper. Like most UN treaty negotiation, achievement of consensus, even on a diluted treaty, will be as good as it gets – a small but important step in the right direction.