Cardinal spent vast majority of career in his native Argentina 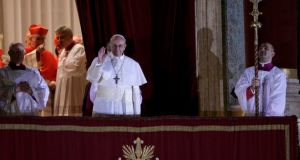 Newly elected Pope Francis, Cardinal Jorge Mario Bergoglio of Argentina, appears on the balcony of St. Peter's Basilica after being elected by the conclave of cardinals, at the Vatican. Photograph: Max Rossi/Reuters.

Pope Francis is the first ever from the Americas, and is regarded as an austere Jesuit intellectual who modernised Argentina’s conservative Catholic church.

Known until today as Jorge Bergoglio, the 76-year-old is seen as a humble man who denied himself the luxuries that previous Buenos Aires cardinals enjoyed.

He came close to becoming pope last time, reportedly gaining the second-highest vote total in several rounds of voting before he bowed out of the running in the conclave that elected Pope Benedict XVI.

“Ladies and Gentlemen, good evening,” he said before making a reference to his roots in Latin America, which accounts for about 40 per cent of the world’s Roman Catholics .

Bergoglio often rode the bus to work, cooked his own meals and regularly visited the slums that ring Argentina’s capital. He considers social outreach, rather than doctrinal battles, to be the essential business of the church. He accused fellow church leaders of hypocrisy and forgetting that Jesus Christ bathed lepers and ate with prostitutes.

Bergoglio’s legacy as cardinal includes his efforts to repair the reputation of a church that lost many followers by failing to openly challenge Argentina’s murderous 1976-83 dictatorship.

He also worked to recover the church’s traditional political influence in society, but his outspoken criticism of president Cristina Kirchner couldn’t stop her from imposing socially liberal measures that are anathema to the church, from gay marriage and adoption to free contraceptives for all.

“In our ecclesiastical region there are priests who don’t baptise the children of single mothers because they weren’t conceived in the sanctity of marriage,” Bergoglio told his priests.

“These are today’s hypocrites. Those who clericalise the Church. Those who separate the people of God from salvation. And this poor girl who, rather than returning the child to sender, had the courage to carry it into the world, must wander from parish to parish so that it’s baptised!”

Bergoglio compared this concept of Catholicism, “this Church of ‘come inside so we make decisions and announcements between ourselves and those who don’t come in, don’t belong,” to the Pharisees of Christ’s time — people who congratulate themselves while condemning all others.

This sort of pastoral work, aimed at capturing more souls and building the flock, was an essential skill for any religious leader in the modern era, said Bergoglio’s authorised biographer, Sergio Rubin.

But Bergoglio himself felt most comfortable taking a very low profile, and his personal style was the antithesis of Vatican splendour. “It’s a very curious thing: When bishops meet, he always wants to sit in the back rows. This sense of humility is very well seen in Rome,” Rubin said before the 2013 conclave to choose Benedict’s successor.

Bergoglio’s influence seemed to stop at the presidential palace door after Nestor Kirchner and then his wife, Cristina Fernandez, took over the Argentina’s government.

His church had no say when the Argentine Supreme Court expanded access to legal abortions in rape cases, and when Bergoglio argued that gay adoptions discriminate against children, Fernandez compared his tone to “medieval times and the Inquisition.”

This kind of demonisation is unfair, says Rubin, who obtained an extremely rare interview of Bergoglio for his biography, the “The Jesuit.”

“Is Bergoglio a progressive — a liberation theologist even? No. He’s no third-world priest. Does he criticise the International Monetary Fund, and neoliberalism? Yes. Does he spend a great deal of time in the slums? Yes,” Rubin said.

Bergoglio has stood out for his austerity. Even after he became Argentina’s top church official in 2001, he never lived in the ornate church mansion where Pope John Paul II stayed when visiting the country, preferring a simple bed in a downtown building, heated by a small stove on frigid weekends.

For years, he took public transport around the city, and cooked his own meals.

Bergoglio almost never granted media interviews, limiting himself to speeches from the pulpit, and was reluctant to contradict his critics, even when he knew their allegations against him were false, said Rubin.